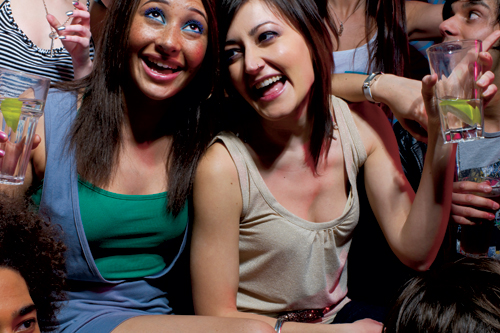 The rate of binge drinking among teenagers seems to have held steady in the last few years. But it’s premature to toast our perceived success in keeping alcohol away from our kids.

Why? Because most American teens begin to drink by age 15. More than 1,800 college students die each year in car accidents, and more than 750,000 are involved in alcohol-related physical or sexual assaults. The unintended consequences of binge drinking—which can include auto fatalities, falls, pregnancy, contracting a sexually transmitted disease (including HIV/AIDS), dating violence, and drug overdoses—don’t vanish. And new research is uncovering additional long-term consequences that affect learning and social adjustment. The teen brain, after all, is a work in progress. And alcohol can interfere with that work.

Binge drinking typically begins around age 13 and peaks between 18 and 22. The Substance Abuse and Mental Health Services Administration says 36 percent of teens aged 18 to 22 reported at least one binge-drinking episode in the prior 30 days.

An episode generally means four or more drinks for women and five or more drinks for men in a short time, though factors like height and weight affect how a body processes alcohol. And young people have a higher tolerance for unpleasant immediate side effects, such as nausea, enabling them to consume large quantities without feeling ill, says Ron Dahl, a pediatrician and brain researcher at the University of Pittsburgh.

New research is identifying some of the aforementioned problems in the still-developing adolescent brain. For example, results of a study presented at last year’s annual meeting of the Society for Neuroscience show alcohol exposure during adolescence changes the body’s ability to respond to stress in adulthood. Problems regulating stress correlate with behavioral and mood disorders, so teen binge drinking may contribute to an increased risk of anxiety or depression later on.

Neuroscientists at the University of California, San Diego, compared the brain scans of teens who drink heavily with the scans of teens who don’t. They found damaged nerve tissue in the drinkers, and believe the damage impairs attention span in boys and the ability to understand and interpret visual information in girls. No one knows if these changes are reversible.

And data published in the January 2011 issue of Alcoholism: Clinical and Experimental Research shows that as drinking intensity increased among adolescents, attention and executive function in the brain—the areas associated with planning and acting appropriately—decreased.

It’s not just the rebellious or disturbed kids who drink. In fact, say researchers at the University of Montreal, drinking is a rite of passage for the cool kids. Their study found that consumption increased as children got older, regardless of popularity. But the more popular a child and his friends, the more they drank. Between ages 10 and 15, the more popular kids who also had popular friends showed a two-fold increase in drinking. Interestingly, the trend didn’t hold for popular kids whose friends were less popular. The researchers concluded that popularity is a risk factor: kids drink to remain well liked and to hold onto their status in the group.

Another risk factor is age. Teens drink more over the summer before they start college and in their first semester, says Mark Wood, an alcohol researcher and professor of psychology at the University of Rhode Island. But those who in high school had been consistently monitored and supported emotionally by their parents didn’t drink as much as those lacking the same level of parental support.

Communication, therefore, is critical. “I would beg parents, before they send their kids off to college, to have a conversation with them about alcohol and drugs,” says Gail Milgram, professor emerita at the Rutgers University Center of Alcohol Studies. “Parents have a lot more impact on their young people than they give themselves credit for.”

What to Say to Your Teen

Though they don’t realize it, Milgram says, parents are the first to serve alcohol to children, for example at family dinners or religious observances. Children also notice how the adults around them behave when alcohol is served. Kids are introduced to alcohol “first by their parents and then by their peer group,” she says.

One good place to start, she thinks, is with a discussion of the legal penalties for alcohol abuse so children understand the consequences. In New Jersey, for instance, the legal and financial penalties for driving under the influence are stiffer for drivers under 21 than for those older. And there’s a different standard for the very definition of DUI: a blood alcohol level of .08 or higher in those over 21, and .02 or higher in those under 21.

Further, she says, “Always be up when your child comes home, so you’re aware [of his condition.] Talk about high-energy drinks. They contain the equivalent of three to four alcoholic drinks plus caffeine. The caffeine keeps you up so you can drink another one. Some New Jersey colleges have banned them from campus.

Parents also should tell their teens to come to them with questions about alcohol use and if someone offers them alcohol. “Ask them what they’re doing and what their friends are doing. Ask if they’re comfortable with the party situation, what’s going on at parties, and whether they understand they can call you for a ride home. Alternatives come from the parents,” Milgram says.