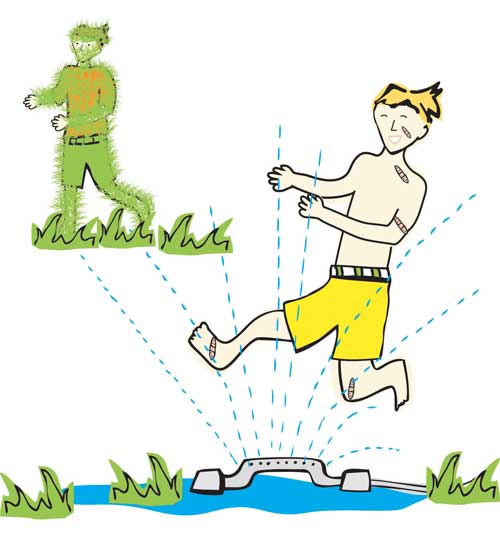 Man I wanted an Inchworm when I was a kid. The TV commercial for this Hasbro ride-on toy played over and over Saturday mornings until I was thoroughly possessed. I begged my parents for it and made outrageous promises about feeding the dog and changing the hamsters’ litter, if only they would get it for me. Then they caved. The giant, neon green and yellow contraption with antennae handlebars was presented to me at the end of the school year.

I was vibrating with exhilaration as I mounted what, in my mind, was my ticket to the open road. Let’s get this worm moving! But the truth of the matter was that my steed was more like a lifeless larva on the grass, so I pushed it over to our driveway. I re-mounted and braced myself for the onslaught of violent speed that was about to overtake me. I even considered grabbing a helmet and goggles, but I didn’t want my brothers to think I was a wimp, so I lifted my little legs and *plooop*. The rotten thing actually inched. “Wha – wha – what the…?” I promptly deserted my s-shaped nemesis (after kicking it a few times) and limp-body-walked into my house. There went my summer.

Mud sculptures were made, shoes were abandoned, bushes were peed on, and the giggling delight was non-stop.

“Go back outside and play with your Inchworm!” Mothers back then—from June to August—would order you out the door in the morning and not worry about you one bit ’til dinnertime. It is precisely because of this unsupervised, have-at-it attitude that I discovered (contrary to my best friend’s pinky-swear-assertion) that even if you flap your arms fast enough, you still can’t fly.

But what fun we had! The hours playing flashlight tag, catching lightning bugs in a jar, spitting watermelon seeds at each other until they stuck, or just lying in the grass looking up at the cloud-animals still makes me grin. And did I mention how tough we were? We didn’t need electronic games—or even doctors for that matter! We could overshoot the Slip ‘n Slide and brush-burn our legs raw, and we would just laugh. When we fell out of a tree we didn’t cry, ’cause “No one’s gonna play with a wussy.”  Such tender times.

Regrettably, my nostalgic recollections screamed out my failure as a mother to my own children. That’s right, folks, never once had I booted my two kids out the front door to do as they pleased for an entire day. I couldn’t even imagine such a thing. I suppose it was my fear of child-nabbers, psychopaths, and crazy drivers that forced me to rob them of this liberty. So I made a decision. Since I couldn’t kick them out front, I could certainly chuck them out back. I hooked up the sprinkler and let them turn the backyard into a swamp.

Approximately 40 minutes elapsed before my boys began begging me to let them back indoors. One had a cut on his knee and the other one’s wet body was covered in so many grass clippings he looked like a mini-yeti. “Stay out there and play!” I shouted through the glass. “But I’m bleeding” the oldest one shot back at me in a duh tone. Nevertheless, I held my ground. I tossed out a Spiderman Band-Aid and quickly slammed the door shut. Hours ticked by. Mud sculptures were made, shoes were abandoned, bushes were peed on, and the giggling delight was non-stop. At sunset I finally called them inside.

Maybe someday, years from now, my son will notice the scar on his knee, and the other one will flick a piece of grass off his arm, and they will smile and remember this afternoon. Perhaps they’ll even recall to their own children the adventures they had while running free and playing in the backyard. Until then, I would like time to creep along as slowly as my old Inchworm; because one day I will really have to let them go, and I just can’t imagine such a thing.

Jane Suter is one funny mom. To share some of your own stories, write to her at janesuter@hotmail.com. Illustration by Colleen Johnson.