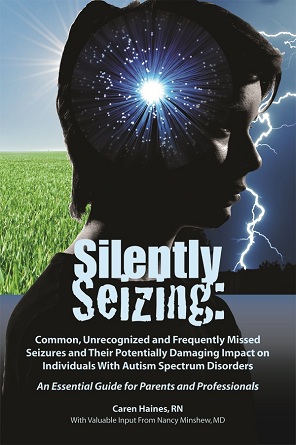 As many as 30% of all children and young adults with autism spectrum disorders may have undiagnosed seizure disorders, to a great extent because they are difficult to diagnose and due to a lack of awareness and understanding. Silently Seizing: Common, Unrecognized and Frequently Missed Seizures and Their Potentially Damaging Impact on Individuals With Autism Spectrum Disorders by Caren Haines, RN, and valuable input by Nancy Minshew, MD, is a breakthrough book that explores what most doctors won't tell you – that in some cases the symptoms of autism are caused by seizures, undetectable with standard diagnostic tools.

At age 2, author Caren Haines' son was diagnosed with autism. By the time he was 12, his diagnosis didn't account for his uncontrollable aggression, the acrid smells that lingered in his mind, and the odd voices that screamed at him from inside his head. By the time he was 18, his out-of-control behavior mirrored a mood disorder with psychotic features.

10 Tips for Parents of Autistic Children

Silently Seizing: Common, Unrecognized and Frequently Missed Seizures and Their Potentially Damaging Impact on Individuals With Autism Spectrum Disorders begins with a close-up look at this family's journey and examines a disorder that cannot always be identified in a clinical setting. Intersecting at two medical subspecialties, neurology and psychiatry, the child who has autism and partial seizures is at a serious disadvantage. By inadvertently allowing children's brains to “silently seize,” we are robbing children of their ability to function normally. When treated early with anti-seizure medications, on the other hand, many children show amazing gains in expressive language and comprehension. Many begin to speak and learn, and many troubling behaviors begin to disappear. Even more important, many children lose their diagnosis of autism.

Backed by up-to-the-minute research, this book includes sections on what autism is, the seizure-autism connection, tips for diagnosing and treating seizures, as well as how to better understand children's behavior.