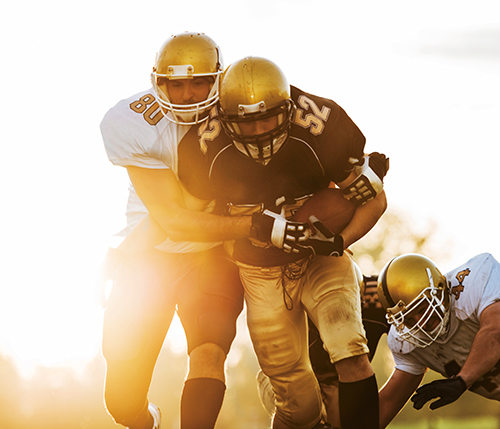 Kevin Saum, a former fullback and linebacker for West Morris Central High School, found out how dangerous ignoring a headache can be back in October of 2007. After getting tackled harder than usual during football practice, Saum decided to play through his injury. That evening under the Friday night lights, he got hit a second time, suffered a seizure and stopped breathing on the sideline.

After Saum was rushed to the hospital by helicopter, his family got the news: their son had Second Impact Syndrome (SIS), a dangerous condition that causes the brain to swell rapidly after sustaining a second concussion before symptoms from the first one heal. Saum also had a subdural hematoma, or a brain bleed, which kills 50 percent of people diagnosed.

“Before I ended up in the hospital, I thought I had the worst headache ever,” says Saum, who continues to suffer from headaches and other symptoms stemming from his injury. “People were really just starting to talk about concussions when I got hurt, so I didn’t think too much about it, even though my head was killing me.”

Fast forward to 2016. The recent release of the movie Concussion and death of a high school quarterback in Warren Hills has intensified the debate over how safe football really is. Is playing one of the most revered sports worth the risks? Or should schools consider doing away with it completely?

For the most part, statistics are black and white when it comes to high school football. It’s considered the most dangerous contact sport and is responsible for the largest number of  injuries. Over the 20-year period from 1994 to 2014 an average of nearly 12 children a year died playing high school football in America, sportswriter Kostya Kennedy reveals in his just-published book Lasting Impact. According to a 2015 study by the Brain Injury Research Institute, 20 percent of high school-aged football players sustain varying levels of brain injuries.  And 40.5 percent of adolescent players in the US return to the game before they’re completely healed. So should your teen pack up his equipment and leave the field forever?

Stephen Rice, MD, Jersey Shore Sports Medicine and Concussion Center Program Director, says not necessarily. “There’s a higher frequency of concussions in football, but you also need to keep in mind the rate of reporting head injuries in football specifically has increased dramatically in the last 10 years,” he says.
In an effort to prevent athletes from getting back on the field too soon after a head injury, the Return to Play law was passed in 2009 in the state of  Washington. By 2014, it had been implemented in all 50 states. The law, along with doctors’ efforts to educate players and parents about concussion safety, has contributed to an increase in reporting potential brain injuries.

“There’s no surprise you’d suddenly see more recognition and reporting because so many people [parents, coaches and players] are getting the message,” Rice says. “It could also mean that people are getting hit more. It’s difficult to say.” But, he adds, it’s encouraging that “parents and coaches are more on top of it.”

While it may be frustrating for your superstar athlete to sit out a few games, it’s definitely for the best. Keep in mind the wait time depends on the specific injury and what your doctor recommends—it’s definitely not worth risking it if your kid doesn’t get cleared.

“It’s very rare, but if athletes 21 years old or younger don’t take the proper time to rest and start playing too soon, they run the risk of getting SIS,” cautions Joseph H. Rempson, MD, a neurological specialist at Overlook Medical Center in Summit. An athlete who sustains a concussion is four to six times more likely to get a second one according to The Brain Injury Research Institute.

In New Jersey, student-athletes must be evaluated by a doctor or licensed health care provider to determine the presence or absence of a sports-related head injury.

Young athletes must meet four criteria before returning to the field:
1. They must be immediately removed from competition or practice after sustaining a head injury.
2. Get evaluated by an athletic trainer with expertise in concussion management.
3. The school staff must contact a player’s parent or guardian about the suspected head injury.
4. The player’s coach or trainer has to provide the student-athlete and his parents with a concussion management checklist. The student-athlete has to receive written clearance from a doctor trained in the evaluation and management of concussions that says he can begin to follow a district’s graduated Return to Play protocol. The protocol requires athletes to be monitored for a recurrence of concussion symptoms while working up to fully participating in practices again.
Rempson believes the New Jersey policy could lead to a decrease in fatal sports-related head injuries. “The protocol in place requires that athletes not only need to be seen by a doctor, but by someone with expertise in the area. Going to a family doctor or pediatrician won’t cut it; you need to be seen by a licensed neurologist or psychiatrist,” says Rempson.

Symptoms to Look For:

If you get the dreaded phone call from the athletic trainer that your kid got hurt at practice, what exactly should you look for? According to the Centers for Disease Control (CDC), your teenager might have a concussion if he experiences any of these symptoms after a bump, blow or jolt to the head or body:
•  Headache
•  Feeling dizzy, sluggish or foggy
•  Extreme sensitivity to light or noise
•  Double or blurry vision
•  Vomiting or feeling sick to his stomach
•  Difficulty focusing or trouble remembering things
•  Feeling more emotional or “down”
•  Feeling confused
•  Trouble sleeping

Rempson emphasizes it’s crucial for athletes to listen to their bodies, and not necessarily other people’s experiences when it comes to getting hit in the head. “You know what a migraine headache is when you get one. It can be aggravated by light or noise, and that makes it way worse,” he says. “With a concussion headache, pain could be triggered by a lot of things like light, noise, reading, texting and even the television—different things bother different people.”

The movement to increase safety on the field is being tackled at the highest levels of the game. The National Football League is working to improve the safety of the game with its “Heads Up Football” program, a series of in-person and online courses that teach coaches and players how to tackle and block correctly.  Despite the effort and money spent, the program’s effectiveness has been widely debated.

Saum speaks from experience when he says that getting a solid education on how to tackle correctly is critical. “There have been several studies out there that show athletes are more at risk when they rely too heavily on, or use their helmet as a weapon.” Teens should also make sure they get a solid foundation in blocking, especially at the higher levels. “Teaching kids to tackle and block before they even start hitting is a great safeguard against head injuries. When I look back, that’s the kind of player I was, I was trying to be the tough guy that runs everyone over.”

“People need to understand that the helmet is for preventing skull fractures, and it does a great job—but it doesn’t significantly reduce or prevent concussions,” says Rice. “For years people have been using the helmet as a point of contact because it seems invulnerable, and that’s not the correct way to teach tackling.”

Rather than relying so heavily on helmets, experts recommend decreasing the amount of one-on-one tackling in practice. “Even the Ivy League has taken measures to reduce the instance of concussions simply by limiting or totally doing away with tackling in practice,” says Rempson. “Obviously if you decrease the amount of times you’re tackling someone straight on, the odds of you getting hit in the head will also decrease.”

Though it’s been nearly a decade since Kevin Saum’s nearly life-ending injury, he still deals with some mild symptoms. He’s gone through years of physical therapy to make up for the damage to his brain. While he continues recovering, Saum is working to help other athletes with traumatic sports-related injuries through his national podcast Heads 'N Tales. “My mission is to make sure all athletes are protected,” says Saum. “There’s a high fatality rate for these kinds of injuries, and if they do survive they’re usually handicapped for the rest of their lives. I consider myself really lucky.”

WHAT TO KNOW ABOUT SOCCER 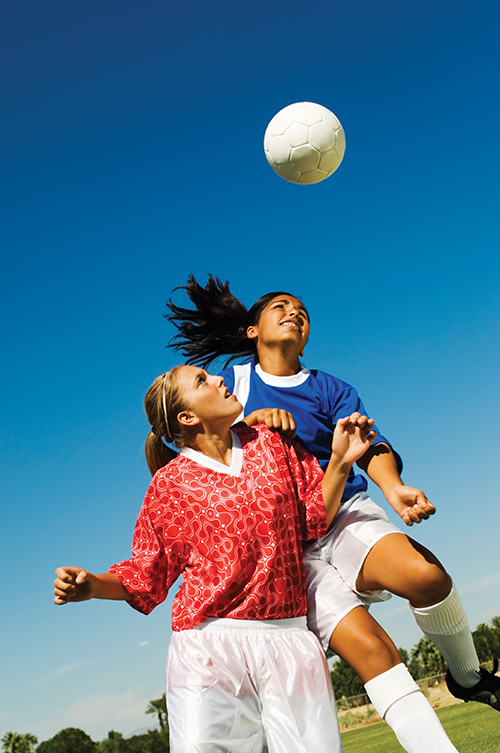 Yes, football is the leading cause of injuries in high school-aged male athletes, but soccer is the biggest culprit when it comes to girls in the same demographic, according to the Brain Injury Research Institute.

A study published in JAMA Pediatrics shows there were 627 soccer-related concussions among girls and 442 among boys  in a pool of 100 high schools between 2005 and 2014. The most common cause was a head-on collision with another player. The US Club Soccer Organization says children playing in U–11 (ages 10 to 11) programs or younger shouldn’t be heading the ball at all. Kids on U–12 and U–13 teams are limited to 30 minutes of header training per week (no more than 15–20 headers per player).

Although there’s no definitive medical reason, female adolescents suffer concussions 68 percent more frequently than males, according to a 2008 report in the Journal of Athletic Training. The study also shows girls take three times as long as boys to become symptom free.

“While learning proper heading techniques is important, concussions on the soccer field usually occur from head-to-head collisions, a player hitting her head directly on the ground or getting hit in the head with the ball when she’s not paying attention,” explains Rempson.

One of the most important ways to help prevent a head injury on the field? Ask your child’s coaches whether they’re teaching proper heading techniques during practice. Then ask them to demonstrate the proper technique so you can reinforce it when they practice at home.