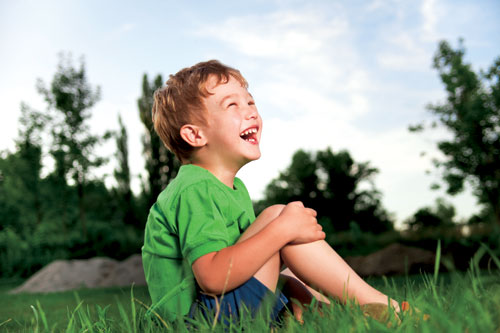 At 7, my son is tall, athletic, and friendly. Using his considerable social skills (I’m sure he’ll be giving me pointers soon), he arranges most of his playdates himself. Zachary also does well in school and dives passionately into various scheduled activities. But he loves impromptu play with pals the most—tag, street hockey, hours of fun that stretch into shared meals and sleepovers.

Watching him grow, I realize his jam-packed, glorious little life bears no resemblance to the fate I’d envisioned for him. There’s no “lonely only” child in my house. No spoiled monster, either. Sure, a one-child family has some downsides, but there’s also a richness I appreciate every day.

Are we a rarity? Statistically, no. As Time magazine reported in a cover piece, “The Only Child Myth” (July 19, 2010): “Since the early ’60s, according to the National Center for Health Statistics, single-child families have almost doubled in number, to about 1 in 5—and that’s from before the markets crashed.” The biggest factors fueling the rise, says Susan Newman, a New Jersey author, social psychologist, and mother of one, are the recession and societal phenomena like delayed motherhood, infertility, divorce, and workplace pressure.

The welcome news, for parents of onlies, is the singleton boom has sparked a reexamination and debunking of nasty stereotypes. While many people are surprised to hear it, Newman says, “Only children turn out just as well, or develop just as well, as other children.”

In her latest book, The Case for the Only Child: Your Essential Guide (Health Communications, Inc., 2011), she cites study after study examining various factors such as social skills, independence, and academic achievement. Newman writes, “…science doesn’t support the unflattering traits associated with singletons.”

All three moms stress their efforts at socialization. “With an only child, parents have to do more in those first few years,” says Newman. “Get him out with similar-age (a little bit older, a little bit younger) children. And that’s where your child learns to share, be empathetic beyond what you’re teaching at home, and to argue and stand up for himself.” Luckily, it’s easier today, she says. “We have daycare, and a word that was never in the vernacular before—the playdate—and mommy jamboree kinds of things.”

Christine Coppa, single mom to Jack, 4, and author of Rattled! (Broadway Books, 2009), chose to live in a new condo development in Riverdale (Morris County) that’s packed with young families. “Jack has lots of friends in our building,” she says. “There’s a pool here and there’s a beautiful courtyard. And we play soccer in the evenings and we go swimming.” A self-described social butterfly, Coppa adds, “When Jack gets out and he’s playing with his friends at the park, that’s also me getting out and hanging out with my friends.”

In Mercer County, Kerry Golden makes “constant” playdates with an eye on her 10-year-old daughter’s future. “I try to help her to be a good friend and to learn how to make a good friend, so that in the future she can develop these close relationships.”

But, as parents of onlies know, the challenges don’t stop at your front door. A one-child family is prone to intensity. Thus, it’s essential to lighten up, Newman says. Let your child get away with the odd infraction; his peers do. Is your daughter feuding with a pal? Let her solve it. Finally, she says, keep expectations reasonable. “Only children know they are the only ones bringing a report card home. They are the only ones who are performing on the stage or on the field. That just adds more pressure.”

At the same time, one-child families can lack structure. On peaceful nights, bedtime may slide or parents may tidy their kid’s mess because it’s easy. To determine appropriateness, Newman says to check what your child’s peers are doing and think big: “Would you clear your child’s dishes from the table if you had four children?”

For many parents though, the mental game is the trickiest. Consider the stranger who butts in: “You better have another or she’ll get spoiled.” Or you dearly want—but can’t have—a larger brood. Or your son asks for a brother. Anxiety and self-blame take hold. “Whether [my daughter] feels that loneliness, I don’t know,” says Golden. “But as a parent you kind of have that guilt.”

That’s why Newman wrote her latest book. For our children’s sake, she says, parents of onlies must focus on the positives. The future looks fine, she reassures: “My 20-something son is independent, he’s happy, he’s compassionate.” She laughs, “I don’t want to sound like I did this great job, but we’re quite pleased with how he has  developed.”

With a bigger cohort and encouraging research, it’s a great moment to be raising an only child. “People are realizing they can be a complete happy family with one child,” says Newman. “And that wasn’t always the case.”

Connie Jeske Crane is a freelance writer and mom to Zachary. She writes on parenting, health and wellness, and green living.

Are you the parent of an only child? Share your experience and advice with us and other parents of onlies.