A college professor captured the hearts of many after he took a student’s crying baby into his arms to soothe him and then continued teaching class holding the infant.

A photo snapped of Hebrew University Professor Sydney Engelberg with the adorable baby boy in blue footie pajamas has gone viral since it began making the rounds last week. It has more than a million views on Imgur as well as almost 57,000 likes and 5,600 shares on his daughter’s Facebook page. 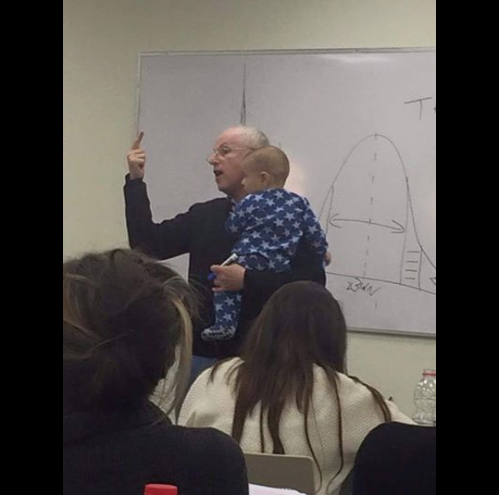 Engelberg’s daughter Sarit Fishbaine said in a blurb posted with the picture that one of his students got up to leave the room when her tiny son started fussing. Instead of letting her go, the professor grabbed the baby from her arms to soothe him without a second thought and then “continued the class as if nothing had happened,” Fishbaine wrote. The baby stayed calm during the rest of the lecture.

“Show me another professor who does that,” the proud daughter said in the caption. “Because my dad is simply the best in the world.”

How amazing is it that in Israel, where this took place, and other countries, it’s commonplace for students with babies and small children to be allowed to bring them to class? Engelberg, 67, even lets moms breastfeed during his course.

The poignant, touching photo sparked a passionate conversation about the importance of supporting moms and dads in higher education and making it possible to earn a degree while raising kids.

Since Engelberg became something of an unwitting champion of that cause, a number of photos of other professors holding babies while they’re teaching (most of them apparently in Israel) have been posted.

More Like This:
Most Popular Baby Girl & Boy Names of 2014
Side-By-Side Pregnancy Photo of Lesbian Moms Goes Viral
What Is a Dad Bod? The Sign of a Good Dad