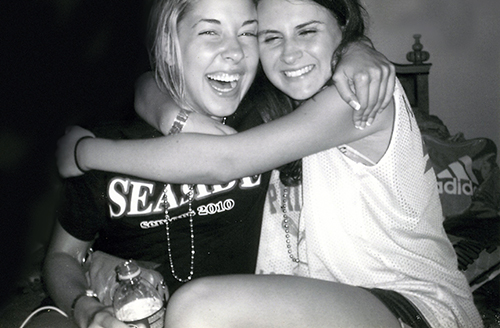 When Jayne Howell was a teenager in England, there were no proms, let alone post-prom blowouts down the Shore. You graduated, hit the pub to celebrate (legal drinking age is “who cares?” in the UK), then toddled home before the folks came looking for you. But in present day Jersey, life’s a tad more complicated.

Howell’s son Charles headed to the “traditional” weekend debauchery of upper classmen in Seaside Heights after his Hunterdon Central Regional High School prom last year. “It’s just a done thing,” said Howell, 54, a mother of three in Flemington. “I [let] Charles go because I didn’t want him to feel like the odd one out.”

What has frequently been regarded as a NJ tradition—many moms and dads themselves hit the Shore post-prom, after all—has morphed into a rite of passage. Just as it was for their parents, the after-prom beach weekend is a very big deal to many kids. And high school seniors as skilled as Wall Street lobbyists pressure their parents with wheedling techniques mastered over 18 years of begging.

The cajoling and planning start in February, with reservations set for hotels or rental beach houses that sit empty until summer starts. Seaside Heights is the most popular destination. Typically, kids pay $300 to $400 each to stay one to three nights in houses that will hold four to 12 kids, real estate brokers say.

“Prom rentals are a bonus season,” says Mike Loundy, a broker at Seaside Realty. “Thousands of kids come between mid-May and mid-June, renting places that wouldn’t be occupied ’til the summer.” Wildwood, too, has a prom influx, former Police Capt. John Stevenson says—something of a comeback after years of kids partying elsewhere.

Of course, motels fill up quickly, too, as kids rent 30 to 50 rooms in each of Seaside’s seven bigger hotels, according to Michael Graichen, director of special events in Seaside Heights. Young guests (or their parents) will pay $200 apiece, with as many as four to a room. Thanks to prom, boardwalk businesses see an extra $30,000 in sales per weekend, he says.

Post-prom beach weekend sounds like 48 hours of parent agony. But many say they see their way through with texts and even covert drive-bys.

And, they added, they’re going to have to trust their kids when they go to college in September anyway. Is it really that much of a stretch to ease the reins 60 days early?

“Look, I’d rather she were home drinking cocoa after her prom,” admits Carla Ross, 46, the mother of a former student at Columbia High School in Maplewood. “But she was going to Towson University in Maryland. She was an honor student, and I trusted her.”

“Trust” is the word most often used by parents girding themselves for après-prom goings-on.

“My friends who are parents at Bergen County Academies trust their kids,” says Cathy Hornyak, the second vice president of the school’s parent organization. “And I know we have taught our own child to make good choices.” An older daughter went through the experience unscathed and happy. “She was safe, everything was controlled and there were no incidents,” Hornyak says.

While trust is sweet, rock-solid assurance is better, say many parents. That’s why some will hire security guards—often off-duty Seaside Heights cops—to patrol outside the rentals to be certain that kids stay inside at night and don’t sneak off to other houses.

And guards can help keep things from getting out of hand for parents who must sign leases saying they’ll be responsible for damages. “Please don’t destroy someone’s home” is one of the final admonishments one North Jersey mom says she’s delivered to each of her two kids who’ve rented down the Shore after prom.

Not naïve, parents know that drugs, alcohol and sex are likely part of many kids’ evenings after prom. “But at this age, they’re already doing what they’re going to do,” says Claudia Wohl, 53, of Sergeantsville, whose son, Max, was a classmate of Howell’s son at Hunterdon Central. Wohl’s two older daughters already did the Shore thing.

“I tell my kids to be smart and safe,” she says. There’s also one more piece of advice she imparts: “Don’t get busted.”

Jeff Loundy, Mike’s brother and the owner of the Sunrise Motel in Seaside Heights, says parents need to ease up a little. His place has been around so long that Loundy has hosted the parents of the kids who party there now.

And the vast majority of revelers are well-behaved, he says. Besides, “I run a tight ship,” he adds. “On my website, I write a note to parents saying we’re on-site 24 hours a day. And that’s how it’s been for 20 years.”

Regardless of how hallowed the tradition, one particular group is horrified by the idea of kids partying together away from home after prom. They’re known as high school principals.

“When it comes to prom and the Shore, there is no comment,” asserts Todd Toriello, principal of Morris Hills High School in Rockaway. In fact, more than a dozen high school administrators wouldn’t return calls about post-prom activities.

One who did, however, pulled no punches.

“It’s troubling that parents allow their kids to go to the Shore after prom,” says John Farinella, the principal of Rahway High School. “No good can come of that. There are too many tragedies out there with teenagers. And the idea of parents renting houses for them is just ridiculous.”

Parents’ view that it’s all part of growing up is wrongheaded, Farinella says. “But,” he adds ruefully, “I’m not in a position to exert my will.”

Even so, New Jersey parents continue to say yes to post-prom beach weekends in enough numbers to keep an old tradition flourishing. Is it the right choice?

Alfred Lubrano is the author of the book Limbo: Blue-Collar Roots, White-Collar Dreams. His work has appeared in numerous publications.

More Like This:
Best Spots in NYC to Take Teens
Sexting: What You Need to Know
14 Things I Wish I’d Known Before My Teen Started Driving