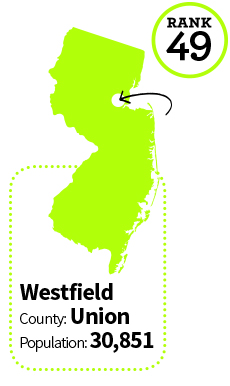 Westfield is among the highest ranking mid-size towns on our list, and for good reason—it has great schools, barely-there crime and neighborhoods filled with young families. But what really makes it stand apart is its downtown. Packed with more than 200 shops (including local stores and national chains, like Trader Joe’s) and more than 40 restaurants, Westfield’s downtown is constantly bustling with events, like Tuesday jazz nights throughout the summer, and festivals, like the FestiFall and Spring Fling. What’s more, it’s commutable to the city—NJ Transit’s Raritan Valley train line gets you into NYC in about 50 minutes. There’s plenty to explore beyond downtown, too, like the colonial Miller-Cory House Museum and nine town parks (like Mindowaskin Park, home to a playground, gazebo and pond).