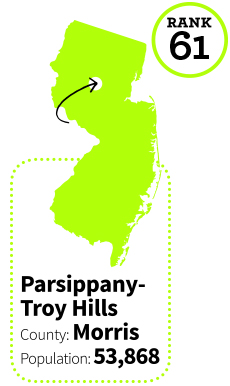 With more than 50,000 residents, Parsippany-Troy Hills is one of the Garden State’s largest towns. It’s also one of the most diverse in our top 75 (35 percent of residents here are non-white), which means your kids get exposure to cultures and ethnicities different than their own inside and outside the classroom.

More than 30 Fortune 500 companies have offices here, which means great things for families, like available high-income work and short commutes. It’s also one of the most affordable towns at the top of our list.