Take The Plunge at These Indoor Water Parks and Pools 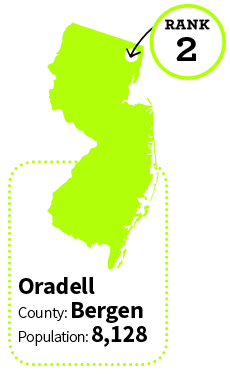 With top-notch schools, lots of young families and an overall second place ranking on our Best Towns list, Oradell is a pretty spectacular place for families—especially if you’re a parent who commutes into NYC. Just 15 miles from Manhattan, you’ve got options: Drive over the nearby George Washington Bridge, take New Jersey Transit’s buses or hop on the Pascack Valley line (both buses and trains stop downtown). The streets of this just over 2.5-square-mile town are lined with quaint Victorian, colonial and split-level homes, and its downtown area is filled with unique stops, like Cool Beans—a coffee and tea house with mommy and me morning programs and date night evening events. No worries about closed-on-Sunday blue laws here—With three fields and the Doug Parcells Athletic Complex (named for the brother of former New York Jets coach Bill Parcells, both of whom lived and played football in town), there’s still plenty to do.