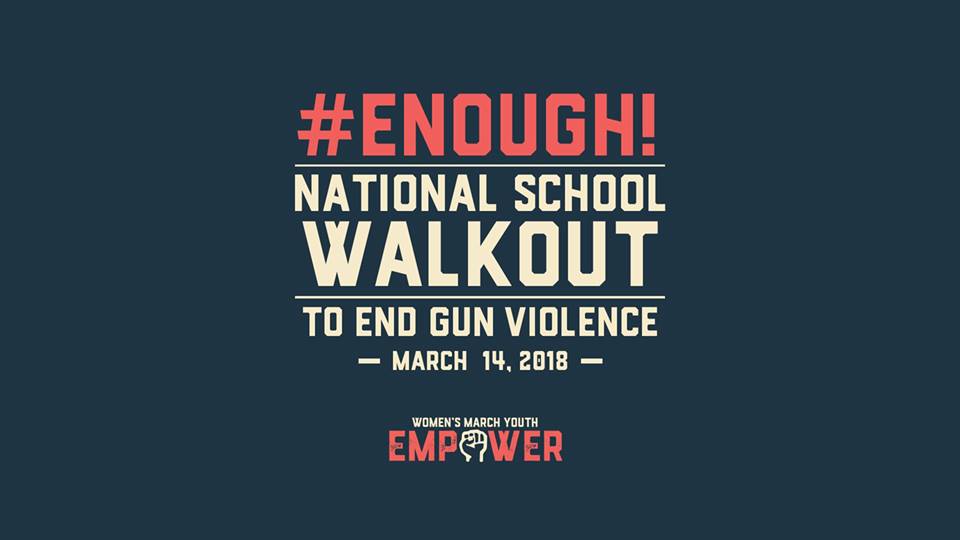 It’s a sobering and scary reality: The mass shooting at Marjory Stoneman Douglas High School in Parkland, FL that killed 17 students last month was the eighth school shooting this year alone that resulted in death or injury. Many parents and students throughout the state and country see the Parkland tragedy as a turning point for tighter gun laws and are organizing to ensure their voices are heard by lawmakers.

March 14 is the day of the #ENOUGH National School Walkout. Some schools have expressed formal letters of support of their students' right to speak out and protest, while other districts threaten disciplinary action post-walkout for students who participate. Cherry Hill High School East said they'd suspend protestors, as well as ban them from senior trip and prom, calling the walkout a "planned disruption." Sayreville School District announced that students who take part in the 17-minute walkout will face a punishment in line with the student code of conduct, citing they believe the walkout is a safety hazard and a disruption (parents are permitted to sign their kids out for the walkout). Some schools are upping police presence for the scheduled protests due to fears of potential shooters showing up (a Lakewood man was arrested after threatening to open fire at March for Our Lives)

Teens, teachers and parents from Parkland and nationally are organizing school walkouts scheduled for March and April. Here’s a look at what’s being panned:

The #ENOUGH! National School Walkout, put on by Women’s March and Women’s March Youth EMPOWER, is taking place March 14. The walkout asks that participants walk out for 17 minutes at 10 am to protest Congress’ lack of action on gun violence.

March For Our Lives, organized by Stoneman Douglas student Cameron Kasky, will walk the streets of Washington, DC and beyond on March 24. There are 440 events around the world scheduled to take place. The site features an online petition on gun reform with 147,169 signatures so far.

National School Walkout is taking place on April 20, the 19th anniversary of the Columbine tragedy, at 10 am. This org is also run by students. The website features graphics to share on social media, T-shirt files, a letter to administration and more. Any T-shirt ordered on the site benefits Everytown Gun Safety. So far, there are 1,417 events nationwide.

NJ students are organizing on social media and locally to raise awareness of local walkouts. Students were reassured by NJ colleges including Rutgers University, TCNJ, Monmouth University and Drew University. These colleges and universities have all tweeted that their admissions decisions will not be affected by disciplinary action as a result of an applicant’s peaceful protest.

Walkout efforts continue to garner interest from communities statewide, and some have already happened. West Orange High School students held a walkout on February 21 to show support for Parkland, a week before West Orange Police and schools hosted a public forum on security. Dumont High students talked to northjersey.com about the emotional climate at school and nationally after their school was put on lockdown as a result of a shooting threat made by a student just two weeks after the Parkland tragedy. Students at Cherry Hill High School walked out to fight for the reinstatement of a teacher that was suspended after saying a similar shooting to Parkland could happen at Cherry Hill.

Many school districts are placing police officers or armed guards at each school and communicating plans for tighter security and lockdown drills with parents. Some high schools throughout the state are also talking about mental health with students. East Brunswick Public Schools recently announced plans to put armed police officers in its schools after a student made terroristic threats. Mahwah Mayor Bill Laforet called for the town to do the same after an eighth grader threatened to “shoot up” Ramapo Ridge Middle School. The Edison Board of Education will hire off-duty armed officers to patrol, as well.

In terms of concrete legislation, the New Jersey Association of Independent Schools (NJAIS) recently sent an open letter to state and federal politicians supporting Parkland students’ mission to ban military-grade weapons and high capacity ammunition. The letter was signed by about 70 heads of NJ schools.

Change on the Horizon

Half of Americans think a change in gun laws is possible, when only 38 percent thought so prior to Parkland, according to a survey from HuffPost/YouGov started after Parkland. There’s also been an uptick in membership among gun policy reform groups, according to The Guardian. Everytown for Gun Safety had a 25 percent jump two weeks after the Parkland incident, the Brady Campaign to Prevent Gun Violence has 16 new chapters, and Sandy Hook Promise, founded after the Newtown elementary school shooting in 2012, has also grown its membership. Students Demand Action, part of Moms Demand Action, has added more than 10K new volunteers after the Parkland shooting.

Want to show your support? Do your high schoolers? Here are links to details on just some NJ walkouts. Search for one in your town (or organize on yourself) on the #ENOUGH, March For Our Lives and National School Walkout websites.

Don’t see your school district on the list? Tell us about it in the comments and we’ll add it to our list.