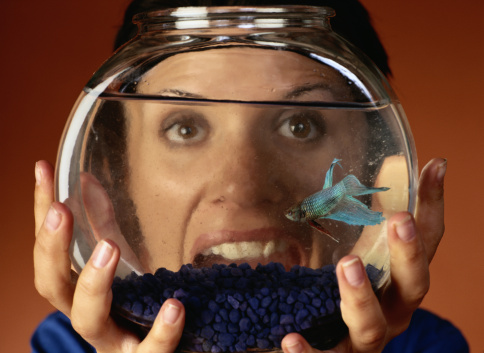 I don’t know about you, but sometimes I feel like a dorky kid who was mistakenly seated at the adult table. At a recent fancy-schmancy dinner party (at which the only person I knew was the hostess), I found myself in a sea of strangers, watching everyone engage in genteel conversation. They seemed so comfortable with themselves, so grown up. I, conversely, felt like a babbling moron. I kept hoping no one would notice how paralyzed I was in this collection of flawless people. So I decided to try to fit in.

Armed with a glass of wine, I launched myself into conversations and pretended to be cool. Unfortunately, my overcompensation led me to telling jokes and blathering on about nonsense. Yes, you could have slapped a top hat and some fishnets on me ‘cause it was jazz hands time. I wonder, why do I sometimes feel like I don’t belong? It reminds me of a pet fish we once had…

Many years ago my son won a goldfish at a carnival. When I say win, I mean he tossed a ping-pong ball at a gazillion jars filled with fish and his ball landed on one of the containers. There was no chance of losing. Ever. So they handed him a plastic bag (which he immediately dropped) with the creature inside. Oh how he loved his alive prize. He named the fish Lucky.

We brought the newest member of our family home, and over the next two hours we installed air pumps, filled the bowl with colored gravel, and positioned a miniature treasure chest, two shipwrecked galleons, and an assortment of plant life. You could barely see Lucky amidst the clutter, but he seemed happy enough, and my little boy was overjoyed. Unfortunately, a few months later, the unthinkable happened: We had a power outage.

Armed with a glass of wine, I launched myself into small talk and pretended to be cool.

As I lit candles and worried about the food in the fridge, my son fretted over Lucky. With no electricity to power the air pumps, how would he survive? I assured him Lucky would be fine and ushered my toddler into bed. But it seems Lucky had become used to an aerated bowl. After the first hour he started swimming funny. Then he started leaning to one side. In a panic I grabbed a straw and started blowing air into the water…until I realized I was blowing CO2 into the bowl and not oxygen. Oops. By the time the lights came on, there was Lucky: capsized with his eyes freakishly bulging out of his head. How was I going to explain this to my three-year-old? But I was tired, so I left the floater in the bowl and went to bed.

The next morning I awoke to, “Mom! You gotta see Lucky! He’s soooo funny!” And there, in the middle of the fishbowl, was Lucky alive and well, swimming sideways, his eyes as big as golf balls from the lack of oxygen. From that moment on, every time someone stopped by our house they would see Lucky and ask, “What’s wrong with your fish?” And, because they couldn’t take their eyes off of our swimming train-wreck, the color-commentary continued, “I swear to gawd that is the strangest thing I have ever seen. Look at him!” We defended Lucky with optimistic interjections: “Isn’t he a miracle?!” But most people didn’t understand. Just like they don’t understand shy people pretending to be extroverts at fancy parties. I guess I shouldn’t blame them. It’s not their fault I flounder while they sail. And who knows, maybe some of them feel like I do, but they’re just better at hiding it? Maybe they are secretly lopsided and a little blown-out? But nobody’s talking. Except me. The dork fish.

I suppose what really matters is how my loved ones see me. And they really see me —far past the sunken ships and through all of those weeds. So I’ll just keep on swimming. And the next time I attend a fancy “grown-up” party, maybe I’ll fit in. Maybe I won’t. Either way I’ll consider myself lucky.

Jane Suter is one funny mom. Share your thoughts at njfamily.com/jane.