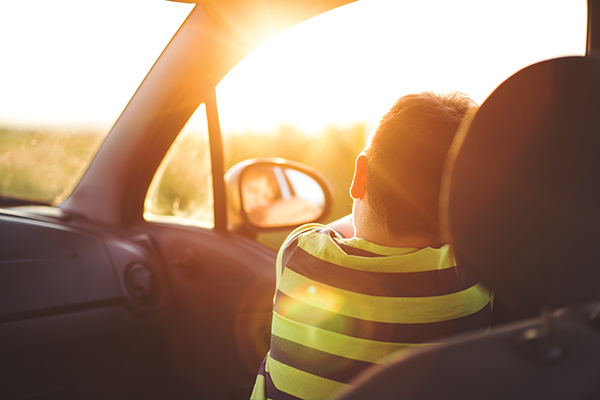 My oldest son was a bright and friendly baby who loved looking at people and crawling around the house to explore. He was also a crappy sleeper who could never seem to settle down and woke up often. When he became a toddler, he was on the go. All the time. He just wanted to run, run, run. When we’d go to a crowded place (like the boardwalk or Sesame Place), I’d write my cell phone number in ink on his little arm and on the brim of his hat in case he ran off. Which he did.

As a preschooler, he often got in trouble. Not for being mean, but for not listening or sitting still—and definitely for not napping. One time, his preschool teacher called to tell me my son was spending nap time doing somersaults and balancing his little Spider-Man shoes on his nose. He also got anxious over certain things and very focused on others.

His sleep problems continued, even after a tonsillectomy and adenoid removal. By the time he got to kindergarten, I knew something wasn’t quite right. I adopted my son, but knew from his health history that his birth father had Attention-Deficit Hyperactivity Disorder (ADHD). Several doctors and multiple tests confirmed that my son has ADHD, too.

He’s now 12, and I’ve learned a few things over the years. Here are some things you should know if your child’s diagnosed with ADHD.

Educate yourself. ADHD is a real mental health disorder. It’s a brain disorder characterized by inattention, hyperactivity and impulsivity, all of which interfere with daily living, according to the National Institute of Mental Health (NIMH). The American Psychiatric Association (APA) estimates that more than 5 million children in the country have ADHD, though the Centers for Disease Control (CDC) puts that number closer to 11 million.

Consider medication. Choosing whether or not to medicate your kid for ADHD is an extremely personal decision with both pros and cons. No one wants to give their children meds, especially stimulants like Ritalin or antidepressants. But sometimes, meds are the only way a child can function in the world. While meds can’t cure ADHD, they can make symptoms more manageable. The first medication my son took for ADHD was melatonin to help him sleep. It’s been a lifesaver (for both of us). Now he sleeps like a log. He’s also on a stimulant and another medicine for anxiety. Other parents choose therapy and holistic methods. Do whatever works for YOUR child.

Find a medical specialist. Pediatricians are useful at diagnosing ADHD and prescribing the initial set of meds. But after that, it’s best to find a developmental pediatrician, pediatric neurologist or child psychiatrist. These doctors know the medication and side effects best. My son sees a child psychiatrist every three months to monitor his moods, progress, symptoms and side effects.

Explore educational accommodations. Children with ADHD may qualify for a 504 or Individualized Education Plan (IEP) in school. These plans provide accommodations like extra time on tests, the ability to take breaks during the school day and seating adjustments. Wrightslaw (wrightslaw.com)—a special education law and advocacy website—is a good place to start.

Investigate resources. ADDitude magazine (additudemag.com) is helpful and full of advice. Websites for the American Psychiatric Association (psychiatry.org) and the nonprofit Children and Adults with Attention-Deficit Hyperactivity Disorder (CHADD; chadd.org) are filled with useful resources, too. CHADD also has online message boards and support groups.

Find your tribe. Some of my best mom friends also have kids with ADHD. They get it, and won’t bat an eye at some of the goofy stuff my kid does, or us leaving a party early because of behavior issues. There are also Facebook groups like ADHD Parent Support and Honestly ADHD Parent Support Group.

Be prepared to hear a lot of misguided opinions. ADHD is not “kids just being kids” or “a diagnosis made up by the pharmaceutical industry.” Children with ADHD are not “in need of a good spanking,” nor do they need to “quit eating sugar.” Many people—including close family and friends—will say uninformed and ridiculous things to you. Try to stay calm and arm yourself with knowledge. No one knows your child better than you and no one’s a better advocate for your child than you are.

There are positives to an ADHD diagnosis, most notably the ability to hyper-focus. Some kids with ADHD can immerse themselves in video games or sports. That can turn out to be a good thing. Olympic gold medalist Michael Phelps has ADHD, as does singer Justin Timberlake and journalist Lisa Ling. The trick will always be to manage the symptoms and redirect that excess energy.

Kathryn Quigley is a freelance journalist and mother of two sons living in South Jersey. She can be reached at kathrynsquigley@gmail.com.