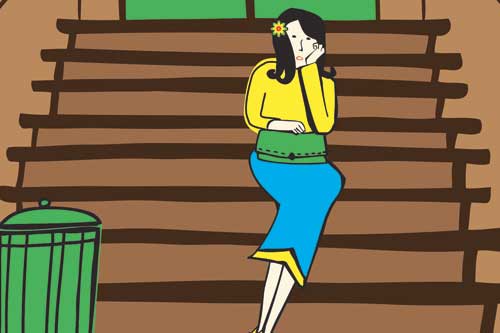 With Thanksgiving at the end of this month, I got to thinking: what am I thankful for? In addition to the big three (my family, good health, and a happy life), I have decided to add one more to my register: my address. I came to this realization after watching Sesame Street today. I’m really thankful I don’t live there.

Now, before you accuse me of being a Muppet hater, hear me out. I have no problem watching these stuffed creatures on TV. But, if I were a resident, being stalked by these puppets the moment I left my brownstone would be maddening. Knowing me, I would forget the “number of the day.” Then, some angry #7 with creepy eyes and a pencil thin mouth would start hounding me. I’m sure the “letter of the day” would magically appear next and get all: “Make me into a word.” I just don’t think I could take it.

But that would be the least of my worries. I couldn’t imagine breaking into song every 10 minutes. First of all, I can’t sing. Second, the playlist in that neighborhood is excruciating.  Ditties about vegetables, feelings, and rhyming words are not really chart-toppers in my book. And, turning Mary Had a Little Lamb into a rap with P. Diddy still doesn’t make it any cooler. I think that’s what happened to Snuffleupagus. All these years of bad lyrics sent him into a chronic depression. Someone should really take that Mastodon to see Gina.

Even if you took out the singing, life on Sesame Street would be rough. For instance, who cleans up after the big, yellow bird nesting in the alley? The way he prances around I would imagine the sidewalks are filthy. Perhaps Abby Cadabby could be in charge of sanitation? Wait a minute. No. That little fairy is always messing up her magic spells. “Poop” would become “soup,” and suddenly there would be sewage flowing through the ’hood. We better give that job to Gordon; he knows how to do everything.

On the Bright Side

I do recognize one good thing: everything seems to be free of charge in this urban region. Never having to pay a penny, not even an animated cent, would actually be quite nice. Look at Hooper’s store. No one pays. It’s basically the most well-stocked food bank in America. But I don’t think I would eat there. I mean, come on, if birdseed milkshakes and porridge are the specialty of the house, and the sandwiches have lips and talk to me before I eat them, then I would rather starve. Happily, while my stomach rumbled, I could watch the parade of celebrities pulling up out front. Which brings me to the number one reason I am super thankful I don’t live on Sesame Street.

You already know what I’m going to say, don’t you? That’s right, Elmo. Presidents, astronauts, and pop singers fall over themselves to meet this little red monster. Sure he has his own world, but for cryin’ out loud, does he have to be so annoying? I cringe each time he has a lengthy conversation with his desk drawer and chats up a tornado. Even worse is his buddy, Mr. Noodle. Maybe it’s because he’s dressed up like a clown, and you all know how I feel about them. But that guy, and his whole circus-ey family, frightens me. Thank goodness for Dorothy. Being a real-life goldfish, she is the only sane thing in Elmo’s World; probably because she can’t talk.

I could go on for hours, but you get the idea. My point is, this Thanksgiving, while you’re gathered around your table, gobbling up turkey and mountains of stuffing with gravy, take a moment to give thanks—for your family, good health, happiness  . . .  and the fact that you don’t live on the street.

Jane Suter is one funny mom. To share some of your own parenting experiences with Jane, write to her at janesuter@hotmail.com. Illustration by Colleen Johnson.