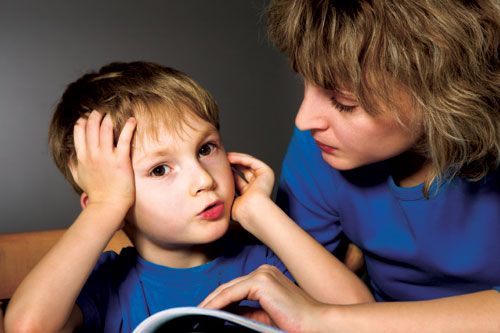 Henry has difficulty following directions.” “Molly can’t seem to sit still.” “Benjamin is moody and easily frustrated in class.” Comments like these from your child’s teacher can raise red flags that an attention problem might be brewing.

But before you jump to conclusions, consider that the academic and social difficulties your child is having might not stem from a behavioral problem. Instead, your child could be struggling with Auditory Processing Disorder (APD), which can lead to problems understanding verbal information and auditory cues in social and academic situations.

Auditory Processing Disorder is characterized by a difficulty in hearing and processing spoken language—even though no hearing loss exists. “The root cause of APD is inside the brain’s central auditory nervous system,” says Lois Kam Heymann, an expert on the topic and director of the Steven and Shelley Einhorn Communication Center at the Center for Hearing and Communication in lower Manhattan. “A child with APD can hear, but for a number of reasons he is unable to make that ear-mind connection that is needed to listen effectively.”

Further, Heymann says, “Listening is the key to learning, and if the auditory messages are not received properly, then the child will face increased frustration both at home and at school.”

It’s estimated that children spend up to 70 percent of their day listening, so APD can affect them emotionally, socially, and academically. The difficulties and frustrations that surround an APD diagnosis often don’t become noticeable until a child is around age 3, as language acquisition and verbal interactions with others become more complex. “Children with APD are frustrated, and this frustration continues to increase as they get older, since the complexity, intensity, and frequency of social and academic interactions increases,” Heymann says.

A young child will vent her frustrations outwardly, often physically, by becoming angry with the other person when there’s a misunderstanding. However, an older child begins to turn her anger inward, as there’s an increasing awareness that something is “not quite right.” At this point she begins to feel inadequate due to the difficulties she has understanding others, or she might become scared because she doesn’t know what’s wrong.

APD symptoms are often confused with other disorders such as ADHD, learning difficulties, or language impairment. Since 60 percent of APD coexists with other issues, an experienced audiologist can determine which symptoms are auditory-based and which are not. In many cases it’s also the observations parents bring to the diagnostic process that can help professionals understand their child.

“APD is such a tricky diagnosis that I place a lot of weight on what the parent has to say,” Heymann says. “After all, they are the ones that know their child. The see the daily struggles and frustrations their child endures and they know that it’s not right.”

“One difficulty in diagnosing APD is that no two people will react in exactly the same way,” says Teri James Bellis, PhD, chair of Communication Sciences and Disorders at the University of South Dakota. “To further complicate the issue, APD cannot be diagnosed from a checklist of symptoms.” No matter how many symptoms the child has, it’s only through careful observation and testing by an experienced audiologist that a diagnosis can be made.

“It hasn’t been an easy road,” says Judy Fishkind, whose son was diagnosed at age 8. “School was a nightmare. My son had difficulties reading and couldn’t focus with the noise in the classroom. For years I was told he had ADD and I never believed it. Eventually we found an audiologist who told us he had APD.”

Another difficulty in identifying APD is that a formal diagnosis cannot be made until a child is at least 7 years old, as the brain function of a younger child isn’t stable enough for reliable testing. However, there’s a screening that can be performed between ages 5 and 7 that identifies behaviors that may suggest APD.

APD can lead to problems understanding verbal information and auditory cues in social and academic situations.

If you suspect your child might have it, find a pediatric audiologist and speech pathologist who understand both its causes and effective treatment. The audiologist can rule out hearing loss and also can assess middle ear functioning and response to auditory stimuli. The speech pathologist will assess speech, language, and cognition. Working together they can better identify an at-risk child and recommend therapy or further evaluation as needed.

Once a child is diagnosed with APD, therapy should be part of the solution. Treatment is tailored to the specific needs of each child, and focuses on three areas:

Therapy definitely helps. Fishkind’s son, for example, is now on the dean’s list at a well-respected university. “If you had told me my son would do this well,” she says, “I wouldn’t have believed it. But I have learned that being your child’s advocate and being consistent with treatments will help your child succeed.”

Characteristic Behaviors of a Child with APD

This list (courtesy of Somerset Medical Center, Somerville) highlights some characteristic behaviors of a child with APD. If these seem to describe your child, consult a pediatric audiologist.

Krystyann Krywko, EdD is a writer and education researcher who specializes in hearing loss and the impact it has on children and families. Both she and her son were diagnosed with hearing loss one year apart.