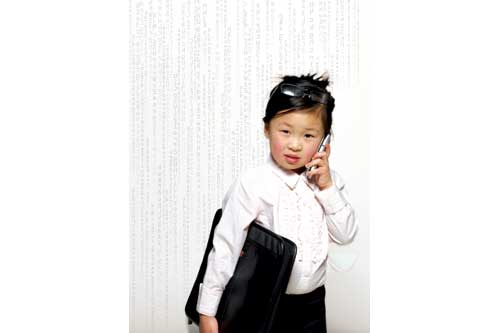 “Mom, I know there’s no Santa,” my 9-year-old daughter announced from the back seat of our minivan. It was Christmastime, and I was used to deflecting skepticism about the Big Guy with my three older kids.

But ready as I was to field her growing doubts, I wasn’t prepared to hear how my fourth-grader made this revelation. “Why do you say that, honey?” I asked.

“I Googled it,” she explained matter-of-factly. “You can find out anything on Google.”

A coming-of-age moment I had experienced only after prying open a basement closet, my daughter experienced the truth about Santa in distinctly 21st-century fashion: via the Internet, which I found both funny and sad.

For all its benefits, there’s no denying technology has fundamentally changed youth within a single generation. From checking grades and school lunch menus online to texting friends, gadgetry has impacted virtually every aspect of being a child. Some of these changes undoubtedly improve kids’ lives—and ours as parents. But is technology actually pulling a bait-and-switch and stealing childhood from our kids?

A recent study from the Kaiser Family Foundation shows kids 8 and older spend more than 7.5 hours daily with computers, smart phones, TVs, or other electronic devices. Behavior problems, obesity, and shorter attention spans aren’t the only negatives associated with heavy electronics use, however.

Kids can’t practice critical face-to-face interaction skills when their heads are behind a screen. And while they may use their imaginations on certain video games, they’re not playing creative games like “house” or “cops and robbers” that stretch their minds in other ways.

“I don’t think technology in and of itself is bad; it’s just that 7-1/2 hours a day is bad,” says Tom Kersting, PhD, a Ridgewood-based counselor who runs “Digitally Distracted” seminars for parents at schools and libraries around northern New Jersey.

Kersting, the father of children ages 3 and 7, says texting has become the primary form of communication among kids as young as middle-school age, while their attempts at multi-tasking are becoming absurd.

“They’re doing their homework while they’re text messaging while they’re listening to their iPods. Everything becomes very watered down,” Kersting says. “A lot of kids are not developing the necessary coping and socializing skills. They’re dealing with real-life problems but haven’t had the real-life experiences of prior generations.”

A case in point is cyberbullying, a stealthy phenomenon experts believe is facilitated without the natural inhibitions that face-to-face encounters evoke.

“Back in the day, it was a different type of bully. You knew who they were,” says Diane Lang of Roxbury, an adjunct professor of child development and psychology at Montclair State University and Centenary College, both in New Jersey. “Now, it can be a pedophile on the other end. Kids don’t know how to stop it.”

Even among the younger set, who as digital natives have never known life without computers, the smorgasbord of kid-centric websites, hand-held devices, and portals to instant information proves irresistible. Parents say these constant temptations make it difficult to provide a childhood like the ones they had.

“All I remember doing is being outside; my mom had to hunt us down for dinner,” says Kimberly Nee, a Hillsborough mom who tries to make her kids, ages 4 and 9, do the same thing. “But part of it is out of my control because nobody’s outside for them to play with. Everybody’s inside.”

And while inside, many are doing what Sarah Anderson’s 5-year-old daughter does: hopping from device to device, from the Wii to the Leapster to the DVD player. “It’s hard because I’m often trying to get her off a screen,” says Anderson, who is a senior editor at ComputerShopper.com and writes a “techmom” column, so she is often immersed in technology herself.

“I told her the other day, ‘If you don’t play with your (non-electronic) toys I’m going to give them away,’ and she just said, ‘OK’.”

Good & Bad at Once

A classic case of technology’s push-pull is the Anderson family’s use of Skype, an Internet telephone system that lets callers see each other with webcams. Anderson, who lives in Essex County, New Jersey, loves that her parents, who live in South Dakota, can regularly “visit” their grandchildren electronically. The catch is that Anderson’s daughter can’t grasp how far away her grandparents really are, and has difficulty understanding the abstracts of time and space.

“It’s amazing that my kids can have their grandparents so close even though they’re 1,500 miles away, but it’s a different experience, a different childhood,” Anderson says.

So how do we strike a balance between these wonderful benefits and the downsides of too much tech? For starters, it’s crucial that parents teach their children the distinction between the real world and the leaps of faith that technology allows. Kids still need practice in the age-old arts of face-to-face communication and spontaneous problem-solving. For their part, parents need to clarify acceptable online conduct, and also manage kids’ technology use by modeling good behavior.

Kersting suggests keeping TVs, video games, and computers out of kids’ bedrooms and in a central area of the house. He also recommends a “tough love” approach that extends as much to parents as their offspring.

“You need to set a nightly cutoff time for technology use,” Kersting says, “and curtail your own usage. Put away the Blackberry and the laptop and interact with your kids.”

Maureen Salamon, from Morris County, NJ, is a health, lifestyle, and relationship writer whose work has appeared in major online and print publications such as CNN, MSNBC, US News & World Report, YourHealth Monthly, LifeScript and The Star-Ledger.