It’s the first day of kindergarten for five-year-old Amy and she’s not happy about it. She hangs on to her mother’s arm for dear life at drop-off and her face is beet red from crying. She refuses to play or interact with the other children and instead sits all alone at her desk, sniffling.

Luke, six, became a big brother two weeks ago. Now he refuses to sleep alone in his bedroom. Most nights he gets up and makes his way into his parents’ bed, claiming monsters are watching him from the closet.

Tara, nine, was invited to her first sleepover at a friend’s house. She was excited about it initially, but when the sleepover night rolled around, she got very nervous and changed her mind. Tara told her mom that she would rather stay home than be with her friends. 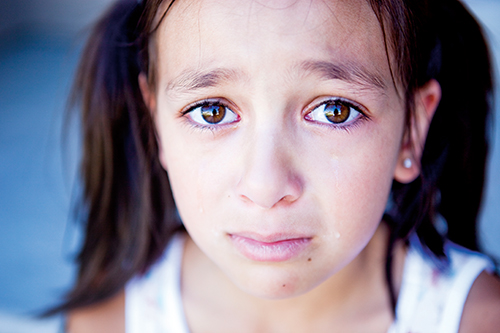 Do any of these situations sound familiar? All are examples of childhood anxiety, a normal part of growing up, say experts who deal with children and adolescents. But when does anxiety cross the line and become a disorder?

Anxiety syndromes are among the most common mental health issues in America, according to the National Institute of Mental Health (NIMH). And in New Jersey, about five percent of kids are diagnosed with one, according to the U.S. Centers for Disease Control and Prevention (CDC). The average age for symptoms to appear is six years old.

What’s Normal and What’s Not?

Excessive worrying and fear in response to a specific situation that can last for weeks or even months is mostly what sets an anxiety disorder apart from typical childhood worrying, says Frank J. Sileo, PhD, past chair of the New Jersey Psychological Association’s Task Force on Health Psychology and a psychologist based in Ridgewood.

Dr. Jed Baker, a psychologist in Springfield and author of Overcoming Anxiety in Children & Teens, says to be on the lookout for any symptom that “makes it difficult to go to school, socialize, sleep or concentrate.”

Some red flags include:

•  Kids who need constant, ongoing reassurance, are plagued by “what if” scenarios and don’t respond to calm, logical responses

•  Excessive avoidance or disruption of normal activities like refusing to attend school, go to a friend’s house, practice proper hygene or go on vacation

•  Excessive distress that’s out of proportion to the situation, leading to crying, frustration,  hopelessness, embarrassment or an inability to be consoled

• Simple phobias, such as an abnormal fear of insects

•  Social phobias, in which a child is afraid of being poorly evaluated by others in social situations

•  Panic disorders leading to panic attacks, which can result in an extreme fear or avoidance of public places

•  Selective mutism, or refusal to speak in certain settings where speech is expected

•  Separation anxiety, or excessive fear of being apart from the parents

•  Illness anxiety, a pathological worry about getting sick

•  Obsessive compulsiveness, such as excessive hand washing, fear of germs or checking and re-checking locks, doors and appliances

What You Can Do

Although there’s a strong genetic component in both anxiety and sensitivity to stress, Baker says parenting style and intervention can often help kids overcome those tendencies. But so can confronting the source of their worry.

Baker is a proponent of “gradual exposure” when it comes to treating kids. “Study after study has shown that if you get anxious kids to gradually face their fears, the anxiety will decrease and they will no longer be controlled by their fear,” he says.

Of course, protecting kids from legitimate dangers is crucial, but “when families enable their worried children by avoiding non-dangerous, yet feared, situations—such as attending  school— they create a higher risk of developing anxiety.”

Dr. Daniel Gallagher, a Maplewood-based psychologist and the chairman of the NJPA’s Health Psychology Group, agrees, saying many children can also benefit from play that teaches them how to face their fears and manage stress. In this therapy, kids are taught to expect and tolerate some level of anxiety since they learn it will pass.

“Development of resilience requires kids to engage in novel and difficult—and therefore, uncomfortable—activities and situations while they learn that these stressors do not have to be distressful,” he explains. Learning to cope while emphasizing positive outcomes with an “I can do it!” attitude can significantly reduce anxiety.

And occasionally, says Gallagher, some doctors and parents find that certain children may benefit from medication to help them move forward.

Parents who think their kids might have an anxiety disorder should ask their pediatrician for a referral to a child psychologist who specializes in panic and anxiety issues, says Sileo. “Children do not have to remain stuck by fear.”

Martta Kelly has been a health and wellness writer for more than 15 years. She lives in West Orange.

Are Her Speech Milestones on Track?

How To Tell If She Has an Eating Disorder

Should Your Son Get the HPV Vaccine?