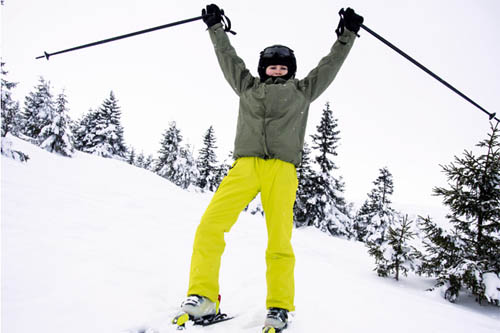 With the Winter Olympics quickly approaching (the games open on February 7 in Sochi, Russia), now is a great time to get the kids active, and excited, for winter sports, of course!

Challenge your kids to put down the controllers—and all the other gadgets they received during the holidays—and have them spend the month “training” to go for the gold in February.

Give figure skating a try with your own tricks, like who can spin around the most times or who can skate on one foot. For the little skaters, see who can make it around the rink the longest without falling. Have as many rounds as you want, or skate until the kids are tuckered out.
The Prize: Winner gets to have their next playdate at the skating rink.

If your kids are ski mavens, bring them to the slopes for a day of adventure. Challenge them to a few courses down the slopes and the one with the least falls wins. Your choice of skis or snowboards.
The Prize: Winner gets a lesson the next time they visit the slopes.

Down Your Neighborhood Hills

Put a spin on your own bobsledding competition. See who can sled down the hill the quickest. Bonus points awarded to whoever can race back up the hill first!
The Prize: Winner picks a movie for the family to watch.

Olympic fun can happen right in your backyard, too! Kids will have a blast holding their own snowball throwing contest. Take turns throwing—whoever has the slingshot arm wins. When their arms get tired, switch to snowman building and see who can pile their snow the highest.
The Prize: Winner gets a victory dinner of their choice.

Jamie Wisniewski is the editorial assistant for New Jersey Family.