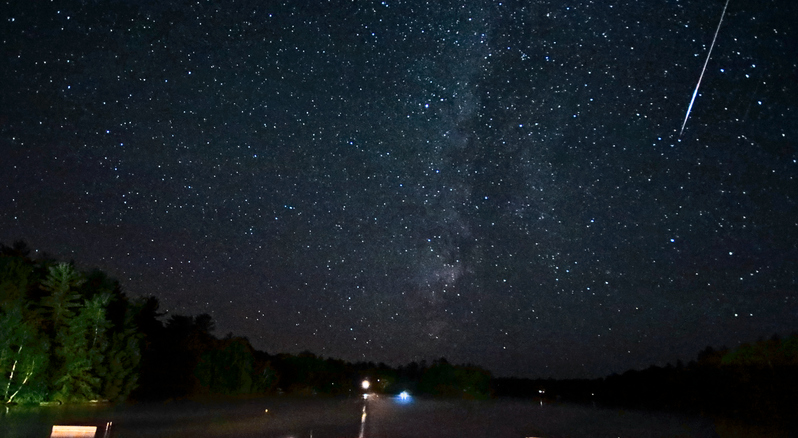 A Friday night Meteor Shower (not to mention a Yankees playoff game!) is a pretty awesome reason to keep the kids up late tonight. They can learn all about astronomy in school, but this weekend they can actually see it firsthand.

Meteors, which are vaporizing pieces of comet ice and dust, are often referred to as shooting stars. This particular meteor shower is named for the constellation it comes from: Orion. While you explain the meteor shower to your kids, have them write down some wishes that they can “wish upon a shooting star.”

In an interview with USA Today, Slooh astronomer Bob Berman pointed out that “The Orionids are popular among stargazers because all of its individual shooting stars are fragments of the most famous comet of all time, Halley’s Comet.”

When is it visible?

The best time to catch a glimpse is between midnight and dawn early Saturday and Sunday morning, where you may see 10-15 meteors per hour. Even better? Thanks to the new moon, the sky will be dark enough for a great viewing. While it may be hard to keep the kids awake, we’re pretty sure this is one cosmic experience they’ll remember.

Kevin D. Conod, an astronomer who managed the Newark Museum’s Dreyfuss Planetarium and a writer for the Star-Ledger, tells us to “keep in mind that if the weather does not cooperate on Saturday morning, the Orionids have a broad maximum, so Sunday morning will be pretty good, too.”

When searching for the meteors, look toward Orion’s club, which will be high in the sky in the south-southeast. Don’t forget to check out planets Mars and Venus or Sirius (Earth’s brightest star), which will also be visible in the night sky. Although the shower will be around all weekend, the best time to check out these beauties is late tonight.

The Orionids are a great opportunity to teach your kids about constellations. (Try this video! It points out Orion.) Make it a game that will keep them awake and excited. Or, try having your kids point out all the different colors the shower produces.

Where to stream it?

If you decide to stay inside, you can stream the shower from your house thanks to Slooh. There are plenty of other meteor showers to spend with your kids, too. Check some of these out.