NYC Day Trip Ideas You May Not Have Thought of Before

Will We Need to Wear Goggles to Protect Against COVID-19? 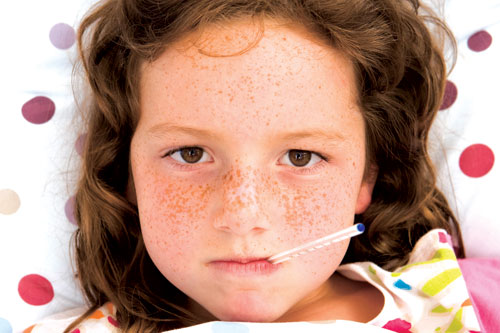 Few things create more panic in parents than a rosy-cheeked child with a raging fever. Yet fever is a common complaint, representing up to one-third of all pediatric office visits and calls.

A rapid rise in temperature is enough to frighten even the calmest mom. Tales of febrile seizures (see below) and other scary thoughts sometimes make parents reach for the phone in the middle of the night. But is fever an emergency, and what does it really mean if your child’s temperature goes up?

Toss out the old wives’ tales you’ve heard about fever, starting with your child maintaining a perfect 98.6° body temperature. Age, activity, clothing, and time of day are all factors that can lead to a rise and fall in  temperature. Temperature is usually lower in the morning and rises in the afternoon and evening. A thermometer reading between 97 and 100.4° is often considered normal.

Forget the “feed a cold, starve a  fever” myth, too. Maintaining a well-balanced diet is always a good idea, but if your child doesn’t feel like eating, don’t force it. Worried that your feverish child could have a seizure? The truth is: fevers rarely lead to seizures. The National Institutes of Health estimates only 3 to 5 percent of children between the ages of 9 months and 5 years will have a seizure caused by fever, and often these types of seizures run in families.

Finally, if your child feels warm, grab a thermometer. The hand to forehead method of assessing fever doesn’t cut it. Alan Weller, MD, assistant professor of pediatrics at Robert Wood Johnson School of Medicine-UMDNJ in New Brunswick, says digital thermometers are a quick, accurate way of measuring a child’s temperature by mouth, rectum, or axilla (under the arm). “Rectal and oral temperatures are more accurate than axillary temperatures,” says Dr. Weller. He recommends taking rectal temperatures for children under 3 months of age. Between 3 months and 4 to 5 years, take rectal or  axillary temperatures. After age 4 to 5 years, temperature can be taken using axillary or oral methods.

“In addition,” says Dr. Weller, “tympanic (ear) thermometers are an option for older infants and children (older than 3 months), but they need to be placed correctly in the ear to get an accurate reading.”

Not every fever merits a call to the doctor, but some cases require medical attention, says Dr. Weller. Notify your pediatrician if:

The American Academy of Pediatrics suggests the goal in treating fever is to make a child comfortable, rather than reduce the number on the thermometer.

“There are advantages to allowing a fever to run its course,” says Dr. Weller. “Fever is a response by the body to an infection, and elevating the body temperature assists the body in fighting off an infection. Fever by  itself is a symptom, and unless it is very  high, will not cause harm to the child.”

When fever causes discomfort, use acetaminophen (Tylenol) or ibuprofen (Advil). Never give children aspirin products; their use is linked with Reye syndrome, a rare illness affecting the brain and liver.

“Acetaminophen is an excellent fever  reducer,” says John Colaizzi, Ph.D., a registered pharmacist and professor of pharmacy at Rutgers University’s Ernest Mario School of Pharmacy. “Ibuprofen is also a good fever reducer, although it can cause gastrointestinal irritation in some cases.” For pain relief, he says, ibuprofen is better.

Dr. Colaizzi also cautions parents to follow dosing instructions carefully, and avoid overmedicating. “Any drug has the  possibility of side effects,” he says. He recommends using one medication at a time. If side effects occur, or the medication is ineffective, discontinue it before trying something else.

Febrile seizures are convulsions brought on by a fever in infants or small children. During a febrile seizure, a child often loses consciousness and shakes, moving limbs on both sides of the body. Less commonly, the child becomes rigid or has twitches in only a portion of the body, such as an arm or a leg, or on the right or the left side only. Most febrile seizures last a minute or two, although some can be as brief as a few seconds, while others last for more than 15 minutes.

The majority of children with febrile seizures have rectal temperatures greater than 102 °F. Most febrile seizures occur during the first day of a child’s fever. Children prone to febrile seizures are not considered to have epilepsy, since epilepsy is characterized by recurrent seizures that are not triggered by fever. —from the website of the National Institute of Neurological Disorders and Stroke.

LaNeta Crighton is a registered nurse and mom of three from Harding Township, New Jersey.