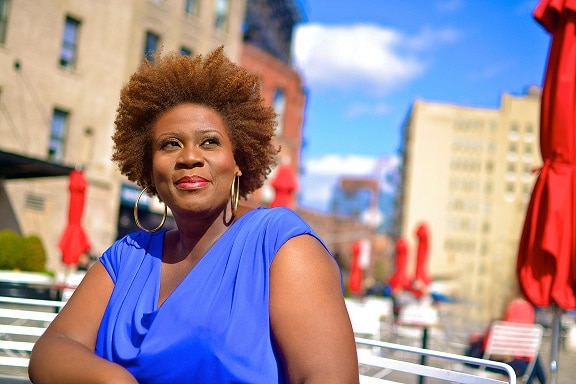 Wharton Arts welcomes world-renowned Broadway star and music industry veteran Capathia Jenkins to its line-up of Performing Arts School faculty to participate in “Wednesday Webinars at Wharton”, a series of weekly one-hour online virtual workshops exploring what it means to have a career in the professional musical theatre world, including the sharing of personal experiences, behind-the-scene stories, tips, training, and more. Proceeds from the series will benefit the Wharton Institute for the Performing Arts Scholarship Fund.

ABOUT CAPATHIA JENKINS
This Brooklyn-born and raised actress and singer starred as Medda in the hit Disney production of Newsies on Broadway. Capathia Jenkins made her Broadway debut in The Civil War, creating the role of Harriet Jackson. Starring in the Off-Broadway 2000 revival of Godspell, she wowed audiences with her stirring rendition of Turn Back, O Man available on the original cast recording. Her performances in the Broadway hit The Look of Love won her critical acclaim and under the direction of George C. Wolfe, Jenkins created the role of ‘The Washing Machine’ in Caroline, Or Change. As Frieda May in Martin Short: Fame Becomes Me, Jenkins brought down the house every night with Stop the Show.

In 2007, with her relationship with Broadway secured, Jenkins starred in the Off-Broadway production of (Mis) Understanding Mammy: The Hattie McDaniel Story, for which she was nominated for a Drama Desk Award.  She was also a proud member of the cast of Nora Ephron’s Love, Loss, and What I Wore.

An active concert artist, Jenkins has appeared with orchestras around the world including the Cleveland Orchestra and Minnesota Orchestra as well as Houston, Atlanta, Seattle, Utah, San Antonio, Memphis, Nashville, Toledo, Colorado, San Diego, Toronto, Kansas City, Edmonton, The National Symphony, and the Pittsburgh Symphony (with Marvin Hamlisch).  Her international credits include the Calgary Philharmonic Orchestra and Hong Kong Philharmonic, along with a solo performance at the Festival Český Krumlov in the Czech Republic. Jenkins has also appeared in Moscow and Saint Petersburg, Russia with jazz big bands.

In 2011, Jenkins had the great honor of performing in the Broadway Ambassadors to Cuba concert as part of the Festival De Teatro De La Habana. She was a guest soloist with Peter Nero and the Philly Pops, with John Morris Russell and the Cincinnati Pops, and with Steven Reineke and the New York Pops at Carnegie Hall.

Her television credits include The Wiz Live on NBC, 30 Rock, The Practice, Law & Order SVU, The Sopranos and Law & Order. She can be seen in the film Musical Chairs directed by Susan Seidelman and can be heard on the film soundtracks of Nine, Chicago, and Legally Blonde 2.