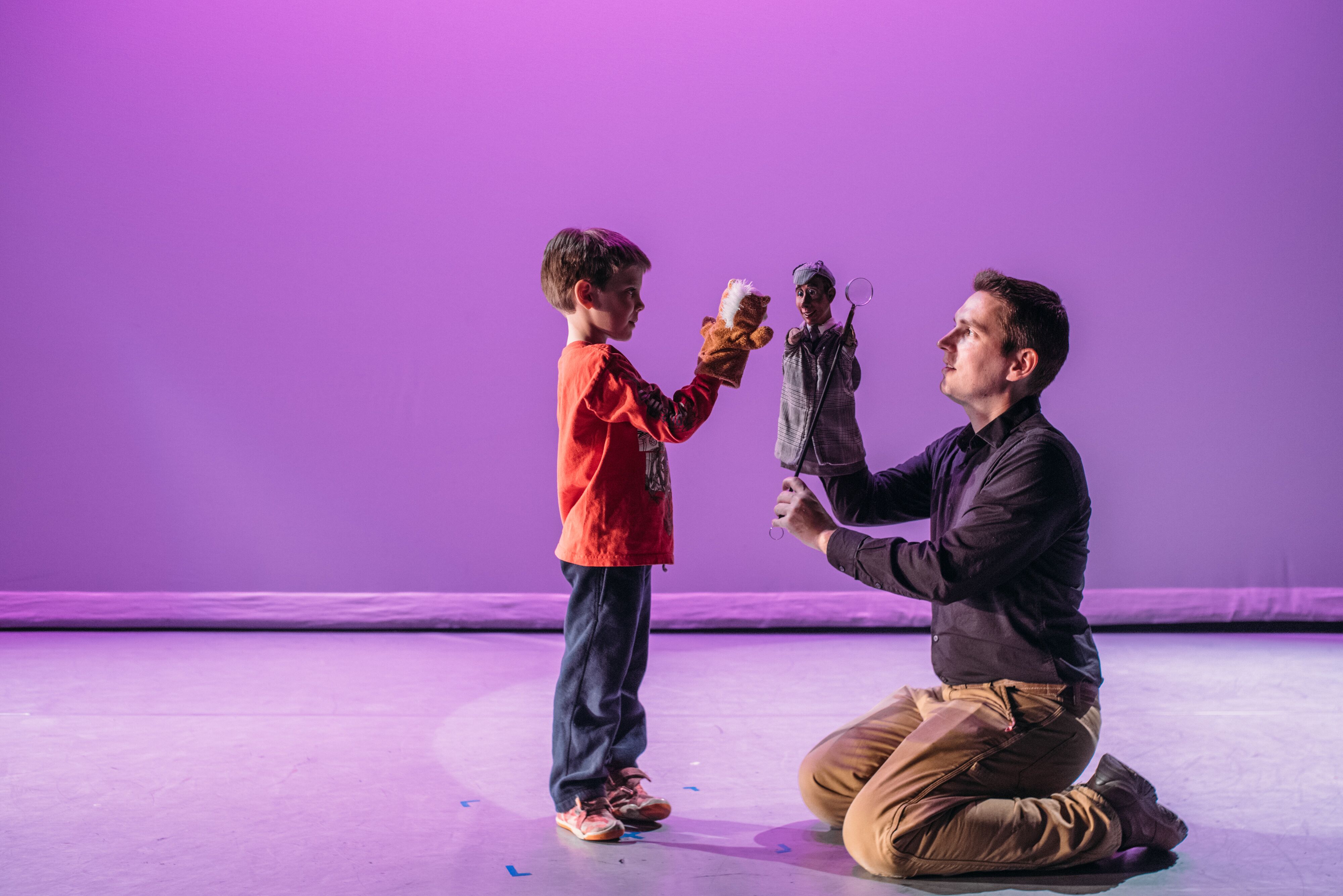 The Theater at the 14th Street Y

The Theater at the 14th Street Y continues to honor the edgy, diverse, and rich history of innovative culture-making in the East Village with the 2019-20 Season from September 6, 2019 through June 2020. All productions are chosen through a submission process and the curated season is co-presented by the Theater at the 14th Street Y. From a wide range of artists the season is a deliberate program of artistic discourse around the theme of Life and Death.

Highlights of the season include:

"As we see in the 2019-2020 Season, different cultures honor and celebrate the life cycle in many ways. Our diverse artists wrestle with how we can learn from the traditions of previous generations and pay tribute through living life to its fullest. While reviewing the submissions, our panel had the refreshing discovery that many artists were drawn to tales of survival and remembrance to explore the theme of Life & Death. There is humor in the life cycle as well as joy and courage. We have productions about surviving cancer, recovering from drug addiction, a son learning about his father's battle with AIDS, a darkly humored ghost story from the Bronx and a rich and lyrical play about love and loss from acclaimed playwright/director José Rivera. Join us as we explore these themes with innovative new works of theater, dance and opera. We'll see you in the Theater at the 14th Street Y", said David Stallings, Director of Arts + Culture.

Theater
7 cities, 1000 people, 1 Winner. Crowd-sourced and audience vetted, the Winner of the 2019 Jewish Playwriting Contest will be announced in June of 2019 and comes home to the 14th Street Y in September for the JPP's featured workshop production. Come be a part of the movement for contemporary Jewish theater!

Blending movement and technology "Recovery" unpacks the container of addiction through the lens of a woman struggling with substance abuse. Where does she belong in a world where legalized drugs and alcohol are so readily accessible? Is she good or evil? The urge to explain and define the addict, society and recovery is cracked open and explored in this hybrid work of theater and dance.

Following a sold-out run in 2018, Freemove Dance returns to present this gutsy and percussive dance piece. It is a call-to-arms for re-defining how and why the clock has a titan grip on our life experience.

Бабушка tells a true story about Jewish life in the USSR onstage- in Russian. Her story is live translated into klezmer music, gibberish, poetic text, and puppetry, creating a meta conversation on the act of translation and historization.

The conflict between wolves and humans has existed for years, but can an unlikely friendship mend the rift between them? A new folk musical about love, loss, and the power of understanding, The Stray shows us growing pains lead to remarkable change.

The Pink Hulk: One Woman's Journey to Find the Superhero Within

Written and Performed by Valerie David

A cancer diagnosis means only one thing: time to get laid! This award-winning solo show follows Valerie's triumphant journey to become a three-time survivor & redefining what it means to reactivate her superhero within. An inspiring story that's been touring the globe!

It's the wrong night and the wrong place for these OMINOUS MEN to be playing a game of "Bones," when the 1977 NYC Blackout hits the Bronx! Overtaken by their demons, they descend into a supernatural night of the soul.

From The Horse's Mouth

With bharatanatyam, kathak, odissi, and sattriya as foundational training, four east coast, contemporary dance companies collaborate to explore the rigor and sanctuary of a daily, physical and intentional practice.

#NastyWomen+ - A Night of She and They Resistance Comedy

#NastyWomen+ A Night of Resistance Comedy that will feature line-ups of women and underrepresented genders and empower those marginalized within the spectrum of she and they identity. Comedy Is the Resistance.

A semi-staged preview performance of "State of the Jews", an opera by composer Alex Weiser and librettist Ben Kaplan which follows Theodor Herzl in the last year of his life, as his efforts to secure a Jewish homeland become increasingly desperate.

Grab a plate for an unforgettable holiday with the Ryans, where family battles and deep secrets are more delicious things on the menu. "Passionate, biting and deeply funny, this play is equal parts fresh and familiar..." - The Villager

A Golem from Buenos Aires

A Golem in Buenos Aires is a multidisciplinary theater play for the whole family, inspired by the Jewish legend of the Golem of Prague. In this original performance, an unexpected event unfolds a new hilarious, poetic, moving story.

Set amidst the AIDS crisis in NYC, this semi-autobiographical play reveals a family of performers wrestling with ambition, tragedy, and the stories we tell about who we are. Ari Brand plays two roles, based on himself and his late father, Natan Brand.

-February 1 and 2 - The Three Little Pigs

The Imperfect Love Song of Delilah and Venizio

Written and Directed by Jose Rivera

Playwrights for a Cause writer Jose Rivera presents a new piece, The Imperfect Love Song of Delilah and Venizio.  Death has been declared illegal by the U.S. government.  Trees grow lights instead of leaves.  Ghosts love the living.  And in heaven you can taste the wind.  Two impetuous lovers look for a love that lasts forever in this fantastical comedy about imperfect relationships, by the author of The Motorcycle Diaries and Marisol.  This play will be running in rep with Planet Connections Short Form Series, curated by Glory Kadigan,at which Award Nominated Planet Connections writers present new short form playlets.

Written and Performed by Romy Nordlinger

Join Jane Austen at her brother's house in this easily accessible hour-long comedy by and about the famous author.

First By Faith: The Life Of Mary McLeod Bethune

From the Travel Ban to Tree of Life, American Jews and American Muslims have been showing up for each other. At the same time, complex tensions - Linda Sarsour and the Women's March, Rep. Ilan Omar and civic discourse - have risen. Four brand-new short plays from our hottest Jewish and Muslim playwrights and directors examine what's changing, how it is positive and how to make it last.

The olive tree: a comedy for the hopeless optimist. A wild, insightful and hilarious "play within a play" from award winning playwright Iris Bahr (DAI, "Curb Your Enthusiasm") it's Noises Off meets Fauda, with a touch of Oslo for good measure.

WonderSpark Puppets returns with the classic fable told with fun puppets and humor that will delight our youngest Theater goers! This show is highly interactive and best for ages 3 & up.

The Theater at the 14th Street Y is proud to present the 14 Street Y Pride Fest 2020. Theater, dance, film, music, drag, and more will be celebrated in honor of the diversity of the LGBTQ community in the Lower East Side.

Subscribe to the 14th Street Y and save with Flex Pass. For $42, choose any three shows from the upcoming season at https://14streety.secure.force.com/ticket#details_a0S36000007O40PEAS.

About The Theater at the 14th Street Y

The Theater at the 14th Street Y focuses on social awareness and change through big picture narrative. Inspired by works that welcome artists of all backgrounds, we place artists at the heart of our community and seek to create an inclusive and open cultural experience for all. Art is incubated here.

About LABA: Laboratory for Jewish Culture

LABA is the 14th Street Y's flagship artist fellowship program that helps incubate works in progress from emerging artists. At the core of LABA's mission is the belief that classical Jewish text study can and should be a source of inspiration and creativity for contemporary culture-makers and thinkers. All of the public art created through LABA aims to transcend cultural and social borders by bringing to light the universal themes and questions our artists encounter through their engagement with Jewish thought.

About the 14th Street Y

The 14th Street Y is a vibrant community center grounded in the belief that contemporary Jewish sensibilities can be a source of inspiration, connection, and learning for the individuals and families we serve throughout New York City's East Village and beyond. With a health and wellness center, childhood, parenting and adult education and enrichment programs, and an innovative arts and culture department, the 14Y is committed to the development of the whole person and bettering people's lives by strengthening family connections and building inclusive and sustainable communities.

Educational Alliance brings together and partners with diverse communities in Lower Manhattan, offering individuals and families high-quality, multi-generational programs and services that enhance their well-being and socioeconomic opportunities. We are a place where everyone is welcome and where progress is powered one relationship at a time. We are proud of our legacy as a Jewish organization and we provide high-quality, transformational services and programs to all New Yorkers through our network of community centers on Manhattan's Lower East Side and East Village. As we have for 130 years, we offer best-in-class programming-now across 15 sites-focusing on a mix of education, health and wellness, arts and culture, and civic engagement.