Rental Assistance is Coming for NJ Residents in Need 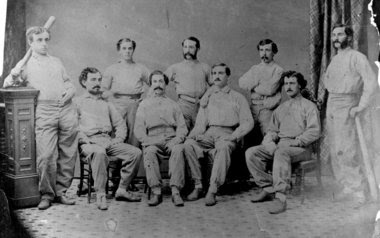 $10; Free for members of Morven

Perhaps more than any other American sport, the history and origins of baseball are shrouded in myth and mystery.  While a game called baseball was played in this country as early as the colonial period, organized baseball, the direct ancestor of today’s game, began in New York City in the 1840s.  About 1855, baseball began a growth spurt, especially in New Jersey where population density along with relatively sophisticated transportation and communication systems greatly facilitated the game’s expansion. During that period some notable baseball firsts, including the founding of the first African-American club, the first interscholastic game and some of the earliest documented women’s games all took place in New Jersey.  The state’s role in the early development of the organized game was of such importance that New Jersey can be justly described as a cradle of the National Pastime.

Beginning in June of 2019, Morven Museum & Garden will host an exhibit on New Jersey baseball, 1855-1915 which will tell the story of the state’s important role in the history of early organized baseball through artifacts, text, images and other visuals.  The exhibit will describe the nature of the first New Jersey baseball clubs, the differences between 19th century baseball and the modern game and cover areas of special interest such as the African-American experience and women’s participation. The exhibit will be interactive and will also offer educational opportunities plus demonstrations with hands-on possibilities.  Simultaneous with opening the exhibit, Morven will publish a companion book which will bring the story of early New Jersey baseball to a wider audience and allow for more in depth understanding.