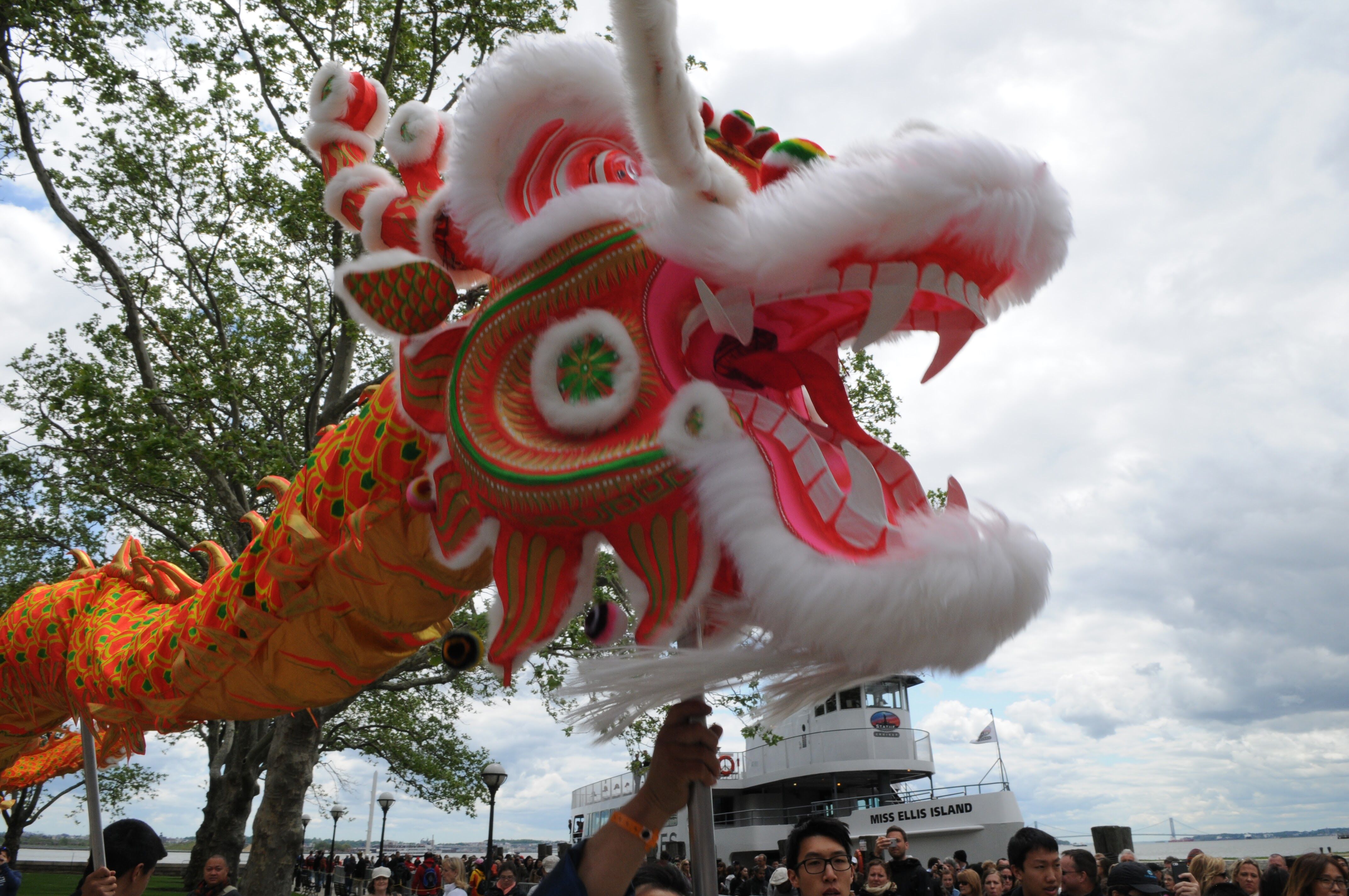 The Great Hall of Immigration at Ellis Island

in partnership with the

The National Park Service in partnership with Nai-Ni Chen Dance Company presents the Ellis Island Asian American Heritage Festival on Sunday, May 19, 2019, with ceremony and performances starting at 12 noon at The Great Hall of Immigration at Ellis Island, located on the second floor of the main Ellis Island building. A full schedule of performances of one hour by nationally renowned artists and performers will celebrate the 2019 Asian American Heritage Month with the National Park Service. The festival will showcase traditional and contemporary Asian American Music and Dance, with notable performing artists from the community in New York and New Jersey including the Nai-Ni Chen Dance Company, Kindling Sindaw (Philipines), Vietnam Heritage Center, the Kalagangothri Foundation (India), and Hālau Hula O Na Mele 'Āina O Hawaii'(Hawaii).

No admission ticket is required for the event. However, audience members must take a ferry to Ellis Island for the festival. Ferry tickets are available for purchase at Statue Cruises in Castle Clinton in Manhattan in Battery Park, and in the Liberty State Park of Jersey City, NJ or online at www.statuecruises.com.

A blossom of color, energy and motion, "like endlessly proliferating forces of cosmic energy," says the New York Times.

Bringing the dynamic freedom of American modern dance together with the elegant splendor of Asian art, the Nai-Ni Chen Dance Company is one of the most visible Asian American dance companies in America. Ms. Chen's unique choreography transports audiences beyond cultural boundaries to the common ground between tradition and innovation, discipline and freedom, and form and spirit.

Since its inception in 1988, the company has earned a broad base of public support and has toured extensively to major performing arts centers throughout more than thirty states. Presented by some of the most prestigious concert halls in the United States, from the Joyce Theater in New York to the Ordway Center in Minnesota and the Cerritos Center in California, the Company has mounted more than twenty national tours and nine tours abroad. Ms. Chen's work has been presented by such acclaimed international festivals as the Silesian International Contemporary Dance Festival and the Konfrontations International Dance Festival, both in Poland, the Chang Mu International Arts Festival in Korea and the Meet in Beijing International Arts Festival. The Company was also honored by a distinctive grant award from both the President's Committee on Arts and Humanities and the Department of State to represent the United States in a seven-city tour arranged by the Tamaulipas International Arts Festival in Mexico. Also, the Nai-Ni Chen Dance Company has the unique honor of having received more than fifteen awards from the  National Endowment for the Arts and numerous Citations of Excellence and grants from the New Jersey State Council on the Arts.

In addition to its extensive season of touring and performing, the company has developed Arts in Education residency programs in school districts to bring culture and arts into educational settings. It's colorful and engaging in-school assembly program "The Art of Chinese Dance" has been presented in hundreds of schools in NJ, NY, CT and PA, reaching hundreds of thousands of youth. The Company is currently in-residence at New Jersey City University and assisting NJCU in the development of a new BFA in Dance.

Halau Hula O Na Mele Aina O Hawaii first opened its doors in New York City in May 1968 under the guidance of Luana Haraguchi, where Haraguchi would hold hula classes in her studio apartment in the Upper East Side of Manhattan. The halau was given its name from her teacher, Iolani Luahine. From its small roots flourished a group that comprised of dedicated students who were interested in learning hula and Hawaiian traditions.

The halau practices the traditional style of hula and protocols. The ancient style of hula, known as the kahiko and the modern style, known as auana, are both taught by Haraguchi. Haraguchi also emphasizes the learning of the chant, or `oli of each dance that is learned.

'Kala' meaning Art and 'Gangothri' meaning the Birth place of sacred river Ganges. Art take its birth in the creative minds of the people leading to happier world. Kalagangothri Foundation works on the objective of creating Happier Mind = Happier World by inspiring young talents into the divine art 'Bharthanataya' - Indian Classical Dance. This knowledge of divine art  imbibes Love, Peace and Humanity among the younger generation. In the year 2005, Akhilandeshwari and Chetan Hebbar renowned Bharthanatya artists established a Dance Company "Kalagangothri" at Mysore the cultural capital of Karnataka, India and run their company in India & US for the purpose of propagation of Knowledge of this Ancient Art & Culture - 'Bharthanataya'.

Kalagangothri Foundation, belives that artistic and cultural activities are essential components of a healthy and vibrant communities. We are committed to our role as a catalyst for change and greater impact through dedicated art education which we serve.

Kalagangothri Foundation believes that the arts are a human right and should be available to all without regard to age, location and socioeconomic status. Access to a spectrum of artistic expressions and cultural experiences is crucial to the development of healthy communities and contributes to the overall academic achievement and social well-being of our younger population. Kalagangothri embodies artistic excellence and foster cultural participation in order to amplify the voice of young aspiring talents.

The cultures, traditions and existence of the indigenous peoples of the Philippines are threatened by corporate development. Because they have been subjected to systematic discrimination and political disenfranchisement, their cultures have been viewed as inferior, primitive, irrelevant, or something to be eradicated and transformed. Through art, theater, and cultural workshops and classes, Kinding Sindaw seeks to assert, reclaim, recreate, and preserve indigenous Philippine culture and traditions, and shows workshop participants its richness, vibrancy and significance to current and future generations.

Through the use of movements and musical training taught by Potri Ranka Manis and other tradition-bearers, interspersed with lectures about the historical significance of the music and movements, as well as integrated theater arts workshops, participants internalizes the indigenous experience. These workshops are targeted to a broad audience, who wants to develop both artistic skill, and take advantage of educational opportunities of learning an ancient culture. These workshops also develop artists as advocates and leaders in their communities.

Instructors include Potri Ranka Manis, Diane Camino, Rose Yapching, Amira Roca, Guro Frank Ortega, and Nonilon Queano. Potri Ranka Manis, founder and artistic director, have extensively learned directly from indigenous communities, and is from the Maranao tribe, herself. Rose Yapching, Diance Camino, and Amira Roca are all Dance Captains, with extensive training and experience. Nonilon Queano is a master musician, in both drums and kulintang. Guro Frank Ortega who is a martial arts instructor.

(Virtual) Wellness Wednesday: Healthcare 101: How to enhance your patient...