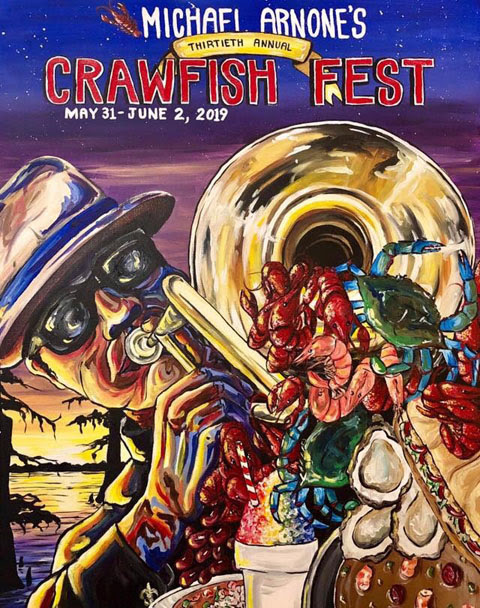 With the legendary Aaron Neville and the scorching hot Marcus King Band leading a roster of some two dozen New Orleans acts this milestone year, the festival is expected to draw 20,000 for a unique weekend experience featuring the best music and food that New Orleans and all of Louisiana has to offer (including 5 tons of imported crawfish).

And it’s all thanks to the passions of a homesick Baton Rouge electrician, who was transplanted to New Jersey in 1989 and wound up importing the tastes and sounds of the Gulf, training all the cooks from recipes he’d learned from his father's backyard BBQ's  because well, that’s how they do it down there. Michael sold just 70 tickets that year, but he persisted and has long since figured it out.

With New Orleans Jazz Fest on so many people’s minds, please take a moment to look toward what Michael Arnone is doing – and has been doing for three decades – in New Jersey. Nothing on the East Coast approaches the 30th ANNUAL CRAWFISH FEST. bring into focus from back home, so he decided to import them. In 1989, he rented a small pavilion at Suntan Lake in Butler, NJ, hired a Cajun band from Connecticut and a country-western band, flew in 300 pounds of crawfish, had a single pot of jambalaya cooking, and printed up 1,500 tickets.

Outdoor Magic Show followed by appearances and performances by Spider...