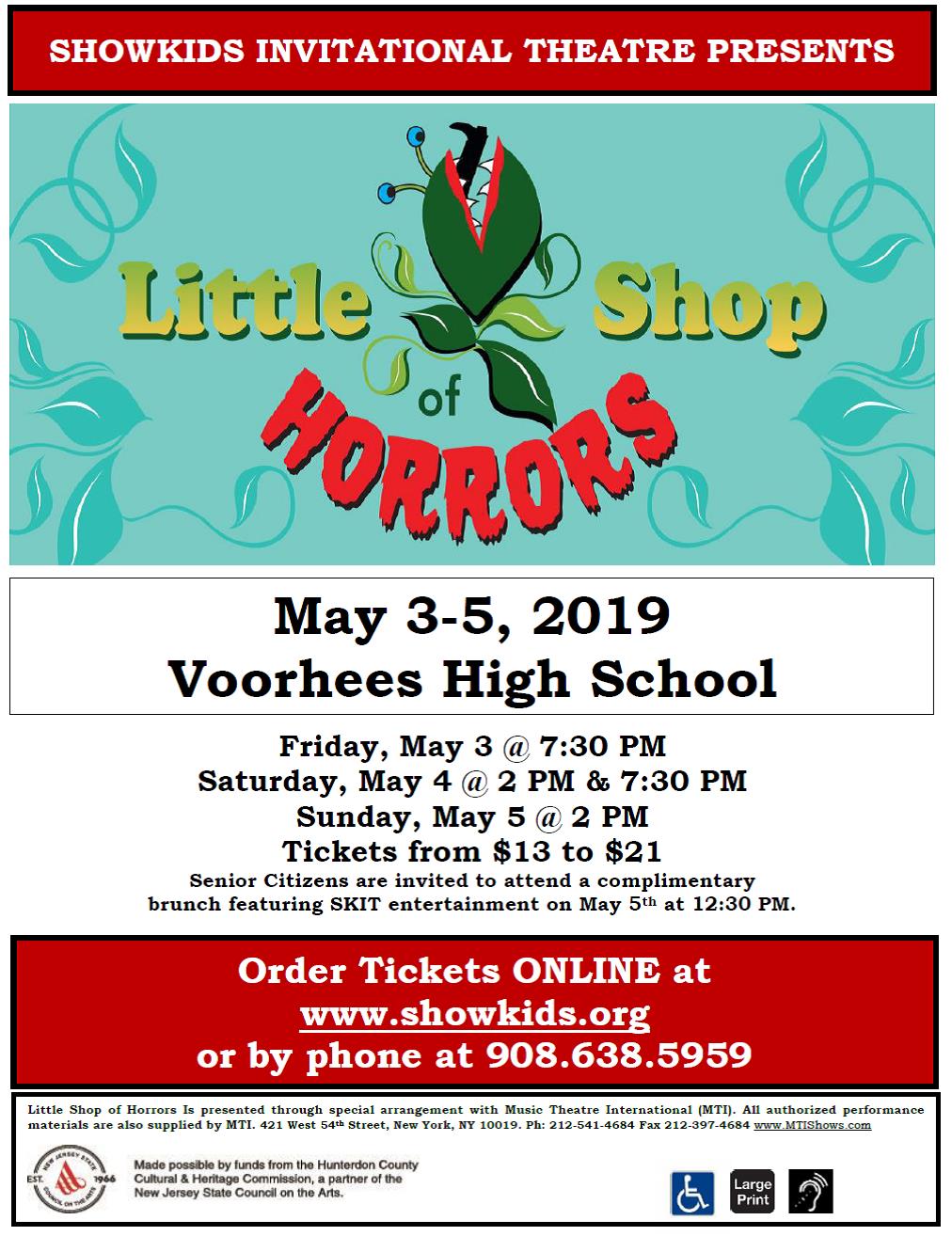 An annual SKIT tradition, senior citizens are invited to attend a complimentary brunch featuring SKIT entertainment before the matinee performance on May 5, at 12:30pm. Brunch attendees will be treated to excerpts from SKIT’s smash production of Newsies.

A Broadway and Hollywood sci-fi smash, Little Shop of Horrors has devoured the hearts of theatre goers for over 30 years. In addition to Little Shop, writers Howard Ashman and Alan Menken are also the creative geniuses behind what have become some of the most popular shows in the world: Disney's The Little Mermaid, Beauty and The Beast, and Aladdin.

The meek floral assistant Seymour Krelborn stumbles across a new breed of plant he names "Audrey II" - after his coworker crush. This foul-mouthed, R&B-singing carnivore promises unending fame and fortune to the down and out Krelborn as long as he keeps feeding it, BLOOD. Over time, though, Seymour discovers Audrey II's out of this world origins and intent towards global domination!

“Although she is a flowering man-eater, Audrey II is not gory or scary in this production,” shares Carolyn B. Newman, SKIT producer and director. “We have done something really creative and very special with her; so audiences can rest assured this is a dynamic PG-13 show, as is our SKIT tradition.”

The silly and soulful cast features a pair of high school seniors appearing in their final SKIT production.

Jonah Lione, 18, of Clinton, leads the ensemble as the carnivore’s keeper, Seymour. A senior at North Hunterdon High School, Lione is a three-time NJACT Perry Award nominee, and “Best Youth Actor” winner for his charming portrayal of the lovable chimney sweep Bert in last season’s Mary Poppins. He most recently appeared as Jack Kelly in SKIT’s production of Newsies.

Another North Hunterdon senior, Kaylyn Feeley, 18, of Clinton Twp. appears as Audrey in the Saturday evening and Sunday matinee performances. Audiences may recall her touching rendition of the Bird Woman in Mary Poppins. The role of Audrey is shared with Allisa Conover, 17, of East Amwell Twp., who most recently appeared as Katherine Plumber in Newsies. Graduating from Central Hunterdon High School this year is Isabelle “Izzy” Cappel, 16, of Ringoes, who appears as Angel, a street urchin, in the production.

Belting it out as the brash, blood-thirsty Audrey II is Imani Smith, 16, of Phillipsburg.

SKIT founder, director and producer Carolyn B. Newman is a Hall of Fame member, inducted by the New Jersey Association of Community Theaters (NJACT) in 2015. ShowKids Invitational Theatre has received 15 Perry nominations for best musical and more than 150 total nominations over the last 30+ years. SKIT won “Outstanding Production of a Musical”, NJACT’s highest honor, in 2014 for Shrek The Musical, and was nominated in 2016 for Me & My Girl and again in 2018 for Mary Poppins, out of over 200 productions reviewed.

SKIT is a nonprofit, family community theatre group. Founded in 1986 to offer the children of Hunterdon County an opportunity to experience the joys of theatre and give the community professional quality children’s theatre productions, SKIT has blossomed into an organization that also provides families the opportunity to share quality time while providing an unending amount of wonderful memories. ShowKids Invitational Theatre programs are made possible in part by the New Jersey State Council on the Arts/Department of State, a Partner Agency of the National Endowment for the Arts, through the funds administered by the Hunterdon County Cultural & Heritage Commission.