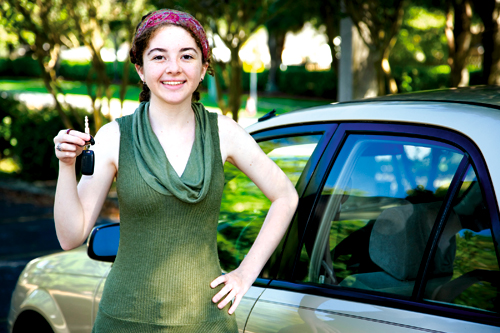 So your child is turning 16 (or chomping at the bit to reach that age)? That’s a big deal for both of you. He’s psyched about learning to drive—and you’re either terrified or thrilled. If you’re in the former category, you’re not alone. I’m currently teaching my only child to drive (he’s currently a probationary license holder), and I’m convinced it’s one of the scariest things I’ll ever do.

If, however, you’re a parent who can’t wait to toss your teen the keys, proceed with caution: Car crashes are the number one killer of 16- to 20-year-olds in New Jersey. No other age group on the road has a higher crash risk.

Surprised? Most parents are. I teach a program designed to educate parents about teen driving. When I ask them what they are most concerned about when it comes to their kids’ safety, parents seldom mention car crashes. Instead, they cite things like drugs, suicide, and predators. But the reality is that car crashes top the list.

We need to take all these issues seriously, but the focus of this article is driving. How can you ensure that your teen survives the most dangerous time of her life? Learn about and leverage the proven principles of New Jersey’s Graduated Driver License (GDL) program. You can bet your teens know about GDL (go ahead and quiz them), so it’s essential you do, too.

NJ’s GDL program, in effect since 2001, is a three-step licensing process (permit, probationary license, and basic) designed to help teen drivers gain experience and build skill while minimizing things that cause them the greatest risk—distraction from passengers, cell phones, and other electronic devices, as well as driving late at night and driving unbelted. In 2011, more than 44,000 teen crashes on the state’s roadways claimed 45 lives: 28 teen drivers and 17 teen passengers driven by their peers.

GDL is helping to lower these numbers. Teen crashes dropped significantly in the past decade. The only acceptable number, however, is zero—no crashes, injuries, or fatalities. That may seem unrealistic, but how can we settle for less? No parent wants to open his door to a police officer bearing the news that his child has been seriously injured or killed on the road.

So in addition to understanding how GDL works, you also must understand why. Under New Jersey’s GDL program, a teen may obtain a permit at 16 years of age after successfully passing written and vision tests and completing six hours of in-car driving training. During the permit phase (a minimum of six months), families are encouraged to schedule plenty of practice driving that exposes their teens to various weather conditions, roadway types, and times of day.

Behind-the-wheel practice is key for building skill (research shows it takes a good two years of driving before a teen’s crash risk drops significantly) and fully preparing your teen to drive solo. The last thing you want is for your teen to drive in inclement weather or on an unfamiliar road for the first time without guidance or supervision. That’s a recipe for disaster.

Once your teen is at least 17, has completed the permit phase, and passed the behind-the-wheel test administered by the New Jersey Motor Vehicle Commission (MVC), he’s granted a probationary license; he may now drive without supervision. Teens must hold this license for a minimum of 12 months. During that time they may transport only one passenger (unless a parent or guardian is in the vehicle) and be off the road between 11:01 pm and 5 am.

Probationary licensees may not use cell phones (hand-held or hands-free) or other electronic devices while driving, and everyone riding in the vehicle must be properly restrained in seat belts or the
appropriate car or booster seat.

Crash data show that distraction and inattention (caused by electronic devices and other passengers) is the leading cause of teen crashes in the Garden State. While teens want to drive themselves and their friends, it’s critical that parents understand the risk. Simply put: A teen’s crash risk increases 50 percent when just one friend or sibling is in the vehicle.

In addition to reinforcing the passenger restriction, consider monitoring your teen’s cell phone use (access records by visiting your carrier’s website), particularly when he’s likely to be on the road. Don’t look at this as spying. Rather, you’re being an involved, caring parent. In fact, research shows that teens who report having parents who set rules and monitor their activities in a helpful, supportive way are half as likely to be in a crash; 71 percent less likely to drive intoxicated; 30 percent less likely to use a cell phone while driving; and 50 percent more likely to buckle up.

A teen's crash risk increases 50% when just one friend or sibling is in the vehicle.

Making sure that probationary license holders adhere to the nighttime driving restriction is also critical, because 40 percent of teen driver fatal crashes occur between 9 pm and 6 am. Knowing this, resist the urge to let your teen drive, at the very least, after curfew. While the GDL law provides an exemption for employment and religious obligations, it doesn’t apply to school-related activities. My son plays hockey and occasionally has practice or games that involve late night or early morning travel. Knowing the dangers for teen drivers, I’m prepared to chauffeur.

Permit and probationary license holders must display a red, reflective decal on the front and rear license plates of the vehicle they’re operating to aid with enforcement of the GDL law. Known as Kyleigh’s Law, the decal requirement took effect on May 1, 2010. MVC offices sell the decals for $4 per pair. (Many driving schools provide them free to novice drivers.)

Once a probationary driver has logged at least 12 months of unsupervised driving, he may return to MVC and obtain a basic or unrestricted license. It’s the teen’s responsibility to do this; those who fail to change their license continue to drive under the GDL program and may be stopped and cited if they violate any GDL provisions.

To ensure your teen doesn’t forget (many do, particularly as they leave high school and head off to college), photocopy the probationary license and put it on the refrigerator or another place where you’ll see it often. Make note of the issue date; 12 months later remind your teen that it’s time to go back to MVC for the update.

Put on the Brakes

Remember that the GDL program is just the minimum standard. If you don’t think your teen is ready for an unrestricted license after the probationary phase, insist he adhere to the provisions a bit longer. The same is true for the permit phase. What are a few more months of restricted driving if it ensures that your teen survives the most dangerous driving years?

Pam Fischer is a writer and consultant specializing in transportation safety, outreach, and education. She’s the leader of the NJ Teen Safe Driving Coalition.

How do you keep your teen safe when she's on the road?