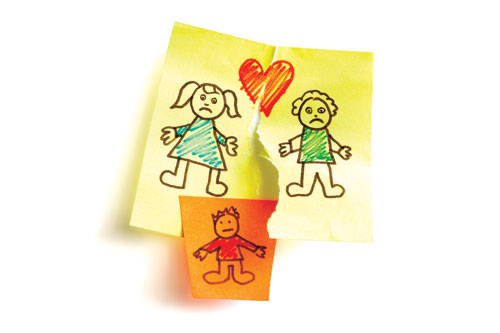 Jackie*, married for 14 years and living in Middlesex County, remembers the moment she knew life was about to change. “My husband and I were fighting right in front of our 3-year-old son. When he stood up at the dinner table, covered his ears, and said ‘please stop fighting,’ I realized I was done,” she says.

Later, she and her husband would sit in a restaurant and talk through their divorce, custody, and a schedule for their child. “My ex and I had the difficult conversations—divorce is just awful and not easy—but we realized that we had loved each other enough to bring the most amazing person into the world. We took it from there.”

On the Same Page

Experts say the key to helping kids survive their parents’ split is peaceful cooperation in parenting.

“Children have a hard time, so parents can make this transition easier. You can’t eliminate all conflict, but you can make it less traumatic by introducing appropriately reasonable cooperation; move beyond the day of the divorce,” says Dr. Judith Wallerstein, author of The Unexpected Legacy of Divorce: A 25 Year Landmark Study (with Julia Lewis and Sandra Blakeslee, Hyperion Press, 2000). Wallerstein says routines and rules in child-raising are important: “The courts think [parenting after divorce] is about religion, but it’s about bedtime.”

She also says it’s important to be amicable and consistent when setting up two homes. “Do not have two bedtimes; don’t have a difference in allowances, junk foods, and schools. Apply the same rules.”

According to Jackie, implementing this advice made her situation workable. “I realized my ex will always be my son’s father. This isn’t going to change. There are a lot of things we may have messed up, but our child is not one of them. We’re good parents.”

They worked out a custody schedule, which the boy keeps in his book bag. They dole out the same discipline at both houses; if he loses a TV privilege at Dad’s house, he loses it at Mom’s also. She says they go to parent-teacher conferences together.

Jackie even moved to another state when her ex-husband opened an office there and bought a home. “He asked if I’d consider moving. I thought about it, and then we found a school for our son we really loved. I turned in my notice at work and sold my house in New Jersey.”

Experts say the key to helping kids survive their parents’ split is peaceful cooperation in parenting.

The co-parenting is going so well, she admits, she has spent holidays with her ex and his girlfriend. “It’s important to me that she and I get along, since our son is there a lot.”

Wallerstein echoes the strategy of moving beyond the day of the divorce: “Years later, are you still working together to raise this child?” She adds: “Divorce is not the moment you sign the separation agreement. It’s a whole way of life.”

Kids, of course, are also pragmatic. When another mom, Jenna, thought her son might be having trouble in school, she rushed to his side, ready to disperse adult explanations about how “we were unhappy together, but happy apart.” But he wanted more concrete information. “He looked at me and said, ‘I don’t care about that. I just want to know where I can play Nintendo’.” That was easy to fix: they now have two game systems.

It’s Not About Blame

What happens if you and your spouse are stuck arguing?

Advocates of the collaborative law form of divorce—when attorneys agree to stay out of court, and instead assemble a team of mental health counselors, coaches, financial advisors, and child specialists—say parenting details can be worked out; divorce doesn’t have to be adversarial.

“Collaborative law is just looking forward. It’s not about blame. It’s about moving a family into the future, having two households. The divorce is between a husband and wife; you’re not getting divorced from the kids,” says Ken Rempell, a family law attorney in Millburn specializing in mediation and collaborative law. “And research shows the less conflict, the better it is for the children.”

“Kids do not have to come out damaged,” adds his wife, Dr. Jeryl Rempell, a marriage and family therapist in Short Hills who is also trained in the collaborative method. “In collaborative, mediation, or cooperative [forms of divorce], we’re flushing out the goals and helping families transition.”

“The more the parties can communicate and work on a solution to their split from one household into two, the better off everyone will be,” says Donna Cheswick, a certified divorce financial analyst. “Plus, the kids will see that even during difficult situations, their parents can be adults and work together to solve problems, versus fighting.”

Rempell acknowledges angry break-ups are hard on children. “The parents won’t stand next to each other at soccer games, so the kid has to wonder which parent to run to when they do well.”

Mental health professionals can advocate for kids in those situations, she says, and coach parents on how to work out parenting amicably. “It’s just learning different skills,” she says. “If parents are calmer, kids should be in the center—and not in the middle. Eventually parents can’t believe what they can accomplish without fighting.”

Families must decide on a structure of life, and everyone needs to focus on agreement. That should probably include an annual review of the child’s rules, says Wallerstein.

Jackie understands how emotions sidetrack even the best intentions. “My divorce was not amicable,” she admits. “But where our son was concerned, it was supremely amicable. As simple as it sounds, our love for our son transcended any bitterness for each other.”

How to Tell the Kids

What other advice do you have for helping a child cope with divorce?