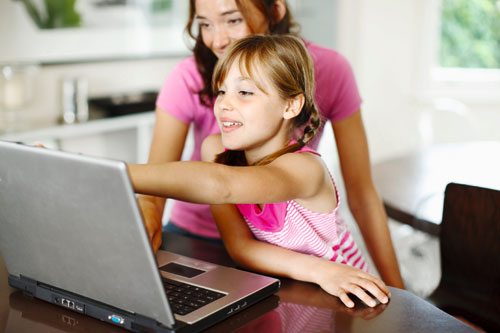 When Elaine Dennis’s oldest daughter Breanna was ready to start kindergarten, the Dennis family was planning to move mid-year. So Elaine, a former teacher, decided to homeschool her young daughter for a year and start public school in first grade. “I knew I could teach her to read and write,” says Dennis, “but I wasn’t sure I could do everything else as they got older.”

After attending a presentation about a cyber charter school, Dennis enrolled her daughter in it for first grade. Now all four of her daughters “attend” the school from their home in Belle Vernon, Pennsylvania.

Education company K12 Inc. operates cyber schools in 33 states and plans to open the 850-student New Jersey Virtual Academy (NJVA), New Jersey’s first full-time, accredited cyber school, next fall. Lorna Bryant, Head of School for the NJVA, welcomes the comparison between virtual graduate schools and the NJVA, but cautions that they are not identical.

“We’re working with children,” Bryant stresses, “and there’s a big difference between being a middle school child and being an adult taking a class online. There’s a lot more support and a lot more structure in this online approach than there would be in a college class.”

Courses require students to attend online group-sessions with teachers and peers, view recorded tutorials, instant message with instructors, and complete offline work. And, according to Bryant, the courses are structured for individual students. “They are given a schedule by their teachers based on their needs, strengths, and challenges. Then they work to get the work done on the schedule that works for them.” Elaine Dennis thinks the self-paced schedule works well for her daughters. “I was watching how fast they were learning one on one,” she says.

Courses require both online and offline work, and instant messaging with instructors.

Unlike traditional schools, cyber schools offer students flexibility in the schedule (and location) of their schooling. “Very rarely do we say, ‘Every Monday everybody at the same time has to be here for history or for math.” Instead, Bryant explains, “there will be some whole-group instruction for students who can attend. If they can’t, it will be recorded, and the teacher will follow up afterwards.”

Although their schedule can be flexible, students in charter cyber schools are subject to public school attendance and testing requirements.

Some parents may fear that with a cyber school, their children will be in front of a screen all day. But Bryant estimates younger children only spend 10-20% of their learning time receiving direct instruction online. “A kindergartener is not going to sit all day at a computer,” she says. “He will work with blocks or map manipulatives. A student doing a science experiment is going to have that delivered to her so she can conduct the experiment at home.” She explains that the schools supply everything the child needs, from the computer and the internet connection to books and goggles.

Like other charter schools, families turn to cyber schools for myriad reasons. For some students, cyber schools offer an opportunity to gain some ground after having fallen behind. Others enroll to avoid an undesirable environment at their public schools or to attend school around medical treatments. And, of course, young athletes and actors can benefit from the flexible schedules.

Dennis says she appreciates the focus on learning. “My daughters are typical kids,” she says, “They still hang out with the kids in the neighborhood. But there’s no drama at their school.”

Bryant acknowledges that cyber schools aren’t for all students. “This model probably works really well for 1% of the public school population,” she says.

Also, cyber schools and K12 Inc. aren’t without their critics. A report published by the National Education Policy Center in July 2012 found that only 27.7% of K12 Inc.’s schools reported meeting Adequate Yearly Progress (AYP) standards in 2010-11, compared to 52% for brick-and-mortar schools in the nation as a whole.
Also in July, the New Jersey Department of Education postponed issuing the charter for the New Jersey Virtual Academy, delaying the school’s opening until this fall.

But Bryant warns that AYP can be misleading when many students enroll years behind grade level. “It’s not a cure-all,” she says, “and it’s not going to solve problems for every child, but it certainly works very well for those that it works for.”

Kevin Johnson is a NJ-based writer who has taught high school TV production.