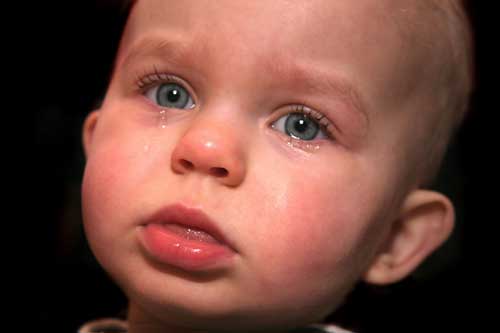 Everything started with a misdiagnosis. Just four months later we were in the ER as our 11-month-old daughter was having an anaphylactic reaction. I was a new mom determined to do everything “right.” I breastfed and never gave my daughter Sofia a single drop of formula.

When Sofia was 7 months old, she developed a little patch of eczema behind her right leg. The pediatrician quickly prescribed a topical steroid ointment and said she had sensitive skin. A week later the eczema vanished from her leg and reappeared on her belly, face, and arm. My once happy baby was now uncomfortable, scratching constantly and even bleeding. During this period of time, she even got a double ear infection.

Meal times began to get frustrating, as Sofia pushed away foods she once enjoyed. When food got on Sofia's cheeks, they became instantly red and out of nowhere she would get a runny nose and start rubbing her eyes.  Weeks passed, and Sofia eventually developed a cold with a persistent cough.

Again I turned to my doctor and the diagnosis was troubling, as the coughing had damaged her underdeveloped bronchial tubes. Sofia was diagnosed with asthma. I left crying and was sent home with asthma medication and a nebulizer.

One weekend as my husband tried to feed Sofia, she began crying, rubbing her eyes and nose without stopping. Within 5 minutes, she became virtually unrecognizable due to a swollen face, and she was projectile vomiting. It was without a doubt the scariest moment we have ever had as parents.

When we arrived at the ER, she was having trouble breathing. Sofia was immediately given an epinephrine injection that saved her life. I was informed that she was having an anaphylactic reaction. The doctors wanted to know what she ate. It turned out the minor ingredient of non-fat milk in her baby food was the culprit. The doctor informed us that Sofia had a severe food allergy to cow's milk.

I was shocked and confused. No one in our families had food allergies, and she’d never even had cow’s milk. Then I realized what was happening. I was drinking milk and eating dairy products. She was getting the milk protein from me when I breastfed her!

Immediately, I eliminated dairy from my diet. We saw an allergist who confirmed that she had all the symptoms of food allergies for about five months leading up to the reaction. If only I had known what to look for! Instead, we gave Sofia medicines that essentially masked her symptoms.

Sofia was given blood tests and skin tests, which indicated that she was also allergic to eggs, peanuts, and tree nuts. With this new diagnosis, I was given a long list of ingredients to avoid. Within three weeks of eliminating these ingredients, all the symptoms went away. She did not have asthma, her cold and cough finally went away, and so did her eczema.

I searched the Internet and discovered FAAN, the Food Allergy and Anaphylactic Network. My journey in the world of keeping my daughter safe from another reaction began. With support my confidence grew and so did my beautiful daughter.

Today, Sofia is a happy, healthy 11-year-old. If you suspect that your child or someone you know has the symptoms described here and/or a tingly, itchy mouth or throat during or after a meal, see an allergy specialist. My daughter was too young to speak, but the signs were there. Don't let these symptoms progress, as your child's life may literally depend upon it.

Letizia Barbetta lives in New York with her husband and three children and enjoys being active in her community. In her spare time, Letizia likes to read, bake, and spend time with her family. Kylie’s Special Treat: A Food Allergy Fairy Tale is the first of what she hopes are many stories she will write.