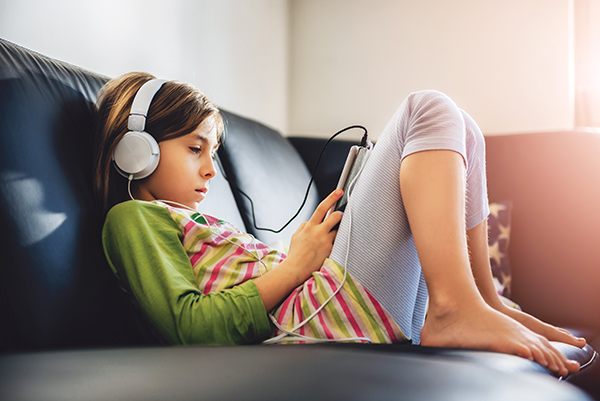 At home, Brenna Farrell Pearce’s then preschool-aged child (the youngest of three) was a chatterbox. “We called her the little general because she was so bossy,” Brenna’s mom recalls. Things were different at school. There, she refused to speak with her teachers and peers. She also wouldn’t talk to members of her extended, close-knit family. “My initial feelings were that she was just shy, that she’d do it in her own time. As the years went on, I realized this wasn’t going to happen and something was indeed wrong.” At parties, she’d break down in tears. “Neighborhood parties, holidays…torture.”

Finally, this past November, the Seaville-based mother took her now 8-year-old daughter to the Child Mind Institute in New York City and had her evaluated for an anxiety disorder known as selective mutism. Bingo. She was also diagnosed with social anxiety. In January, the family attended an intensive three-day therapy session aimed at building skills to help manage and overcome the disorder—a first step. “It was overwhelming, but we were so relieved to be in a place where people understood her, and to have people understand what we’ve been dealing with the last five years.”

It’s not always obvious or clear, that a child has a problem. Parents worry—that’s what we do— and all kids throw fits, cry, sulk, stay silent, space out, refuse to follow directions, make messes and rage at you. It doesn’t always mean something’s wrong, but mental health issues are more common than we may realize. According to a 2016 Children’s Mental Health Report by the Child Mind Institute, 80 percent of chronic mental disorders begin in childhood, and one in five kids and teens suffers from one (primarily anxiety disorders, mood disorders, or ADHD). In fact, 50 percent of mental health issues begin before age 14, and the median age of onset starts at 6. So how do you know if your child might benefit from therapy?

NOTE THE SIGNS…AND TRUST YOUR GUT.

Your outgoing, chatty kid is suddenly antisocial and sulky. Your mellow peacekeeper has become the playground brawler. Aggressive, regressive, withdrawn, anxious or disruptive behavior (especially when it’s a change from the usual) often point to a need for intervention—especially if it’s getting in the way of what kids want to do, says Eileen Kennedy-Moore, PhD, a Princeton-

Today and author of seven books, including her latest, Growing Friendships: A Kids Guide to Making and Keeping Friends.

Younger kids may also cry excessively and avoid situations they used to (or would) enjoy despite nudging, cajoling or bribery. “If the parents’ efforts don’t seem to be moving things in the right direction, it may be time to talk to someone,” Kennedy-Moore says. Other signs may include going months feeling like they don’t have friends, feeling very anxious by school assignments, having more conflict than fun with family or going through a stressful situation (a sick sibling, divorce, etc.). Bottom line: Parents usually know when the situation calls for therapy. Seeing your child unhappy more often than not is a sign. Even if things aren’t severe, don’t rule out therapy.

CHECK IN WITH YOUR CHILD’S DOCTOR.

If your child is in need of help, his pediatrician is an excellent first step and often the first point of contact in noting symptoms, as well as an invaluable partner in managing his mental health issues. “Studies show kids rarely get the care they need. There’s such a huge need for mental health treatment and such a shortage of providers,” says pediatrician Steve Kairys, MD, medical director of the New Jersey Chapter of the American Academy of Pediatrics, as well as the chairman of pediatrics at the K. Hovnanian Children’s Hospital at Jersey Shore University Medical Center. “The goal now is to have more pediatricians engaged in mental health care at the basic level, both screening and providing more direct care, and serve as the point person so they’re not left out moving forward.”

The Pediatric Psychiatry Collaborative, a program organized by Hackensack Meridian Health and Cooper University Hospital, and funded by the NJ Department of Children and Families, was piloted in 2015 to help physicians better address mental health. Patients up to age 18 can be referred to eight regional hubs (eventually expanding to all NJ counties) for access to mental health, behavioral and substance abuse services. Another benefit of working with your child’s pediatrician? “Being part of basic medical care helps demystify and destigmatize mental illness,” Kairys says.

Like dating, finding a therapist you and your child click with isn’t for the faint of heart. A good place to start is by asking people you trust: friends, parents, doctors, local online groups, etc. From there, do some online sleuthing (many therapists have profiles on psychologytoday.com). If you have insurance, your in-network list of providers is a good jumping off point. If someone seems appealing, set up a phone call and ask about his or her perspective on handling your child’s issue.

If that goes well, set up a one-on-one session without your child to go over history and determine if he or she’s a good match for your family. “Chemistry matters a lot. If it doesn’t feel right, trust your gut,” she says. Specialists are often expensive and don’t always accept insurance. If cost is an issue, seek out younger practitioners trying to build their practice or reach out to your child’s school to see what support may be available.

INTRODUCE THE SUBJECT TO YOUR KIDS.

Can you say awkward? “Very few kids want to come see me. Generally, most kids are dragged,” says Kennedy-Moore (though teens often do ask to see a therapist). The best way to sell the idea is to position what’s in it for them: Do they want to feel less stressed? Get fewer time outsor detentions? Manage their emotions better? Brave the dark? Seeing therapy as empowering can be a serious motivator. “No one wants to feel like [they’re] here to be fixed,” she says. Here’s how she describes her role to new patients: “I  help kids to feel happier and get along with the people in their lives. I help kids who feel sad, mad or worried. Sometimes I help kids get along better with their parents, siblings or kids at school. Is that something you want to work on?”

Every practice is unique in its own way (which is why chemistry and connection are so important). The relationship should be collaborative for both kids and parents. Parents can expect to have some idea of what’s happening in therapy, even if the specifics are confidential and permission to discuss needs to be granted by the patient (barring anything dangerous). Young children will likely do a combo of talk and play therapy, while older kids may be asked what’s going on in their lives, as well as what they want to work on (even if it differs from why their parents think they should be there).

HOW LONG WILL IT TAKE?

Therapy is expensive, yes. Year-round sports, extracurriculars, doctor’s appointments and homework make scheduling difficult. According to Kennedy-Moore, one thing that stops parents from seeking help is the fear of signing up for therapy for life. That’s absolutely not true. Some persistent disorders (like autism) may require consistent therapy, but research tells us that most kids should feel progress by 12 weeks. According to research by the Child Mind Institute, depression and anxiety symptoms showed significant improvement after 12 weeks with 80 percent of all kids showing improvement after 36 weeks. It’s impossible to put a figure on the long-term benefits of mastering coping skills at a young age. “It’s an investment,” says Kennedy- Moore. And the ROI that shows up in the form of a happier kid can’t be beat.