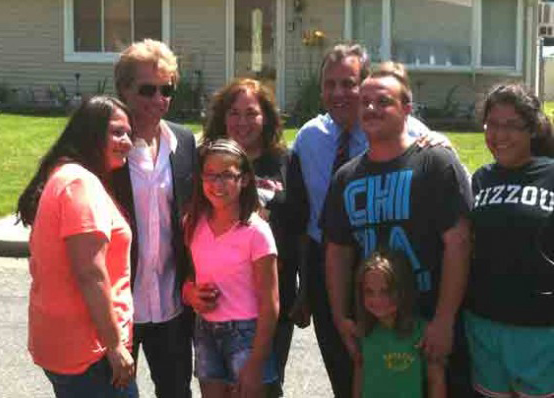 "This incredibly generous donation from Bon Jovi to the Hurricane Sandy New Jersey Relief Fund will go a long way in the rebuilding process," said Governor Christie. "From day one, Jon has been one of the most visible faces for Sandy recovery here in his hometown of Sayreville and throughout the entire state. On behalf of a grateful people, I thank Jon and Bon Jovi for all of the great work they've done for New Jersey."

Bon Jovi is a native New Jersey band and was among the all-star line-up for 12/12/12: The Concert for Sandy Relief.  In the days immediately following Hurricane Sandy, Jon Bon Jovi toured his hometown of Sayreville, spoke with residents, and witnessed the massive damage firsthand.

The Jon Bon Jovi Soul Foundation, a nonprofit organization founded to combat issues that force families and individuals into economic despair, is active in the ongoing Hurricane Sandy recovery process working with federal, state and local officials to direct donations and resources to local recovery efforts and those in need.  This 1 million dollar donation by Bon Jovi to the Hurricane Sandy New Jersey Relief Fund represents the band's ongoing commitment to the people of their home state and to rebuilding a stronger New Jersey together.

"Natural disasters spare no one," said Bon Jovi frontman, Jon Bon Jovi, a Sayreville native. "But you can't imagine the devastation, destruction, and despair until Mother Nature takes aim at your hometown. This is bittersweet; it's heartbreaking to see our fellow New Jerseyans so affected by the ravages of Hurricane Sandy but we're happy to make this donation and offer real, substantial help to the residents of Sayreville and the nearby, low-lying communities as they rebuild their homes and lives."

The Hurricane Sandy New Jersey Relief Fund is a non-profit organization that raises and distributes funds to organizations supporting the recovery and rebuilding efforts of New Jersey communities impacted by the storm.  The Relief Fund's priority is to work with community-based non-profit organizations to ensure funds support initiatives such as mental health services, economic development, financial counseling and assistance for those who have lost homes and jobs, mold remediation, and home repairs.  Fifty one grants have been awarded to date totaling $11 million, with the next grant cycle to be announced later this week.

"Thousands of New Jersey residents, including many here in Sayreville, still haven't returned to their homes. This donation will help the Hurricane Sandy New Jersey Relief Fund 'fill the gap' between the cost of repairs and other aid received by homeowners to restore or reconstruct their homes," said New Jersey First Lady Mary Pat Christie.  "The generous support we continue to receive from so many around the world and especially from homegrown heroes like Jon Bon Jovi will help fellow New Jerseyans complete the work necessary to make their homes livable."  Mrs. Christie stressed, "We are so grateful to Bon Jovi for the love and commitment they have toward their home state and for this charitable donation to the Relief Fund."