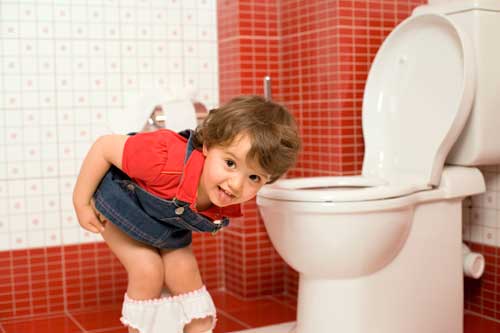 Bedwetting isn’t always due to problems with the bladder, according to new research by Wake Forest Baptist Medical Center. Constipation is often the culprit; if it isn’t diagnosed, children and their parents must endure an unnecessarily long, costly, and difficult quest to cure nighttime wetting.

Reporting online in the journal Urology, researchers found that 30 children and teens who sought treatment for bedwetting all had large amounts of stool in their rectums, despite the majority having normal bowel habits. After treatment with laxative therapy, 25 of the children (83 percent) were cured of bedwetting within three months.

“Having too much stool in the rectum reduces bladder capacity,” says lead author Steve J. Hodges, MD, assistant professor of urology at Wake Forest Baptist. “Our study showed that a large percentage of these children were cured of nighttime wetting after laxative therapy. Parents try all sorts of things to treat bedwetting–from alarms to restricting liquids. In many children, the reason they don’t work is that constipation is the problem.”

Hodges said the link between bedwetting and excess stool in the rectum (the lower five to six inches of the intestine), was first reported in 1986. But he said the finding didn’t lead to a dramatic change in clinical practice, perhaps because the definition of constipation isn’t standardized or uniformly understood by all physicians and patients.

“The definition for constipation is confusing and children and their parents often aren’t aware the child is constipated,” said Hodges. “In our study, X-rays revealed that all the children had excess stool in their rectums that could interfere with normal bladder function. However, only three of the children described bowel habits consistent with constipation.”

Hodges says guidelines of the International Children’s Continence Society recommend asking children and their parents if the child’s bowel movements occur irregularly (less often than every other day) and if the stool consistency is hard. However, he says, a physician should oversee any medical therapy for bedwetting.

Hodges has written a book for consumers that covers this and other pediatric urology issues. It’s No Accident: Breakthrough Solutions To Your Child’s Wetting, Constipation, UTIs, and Other Potty Problems, published by Globe Pequot Press, was released in early February.