The ability to vent one’s emotions almost immediately is both the great advantage and drawback of modern social media. One Washington father learned that the hard way when he reacted to a run in with students at a high school basketball game by openly wishing that someone “shoot up the school real soon!" 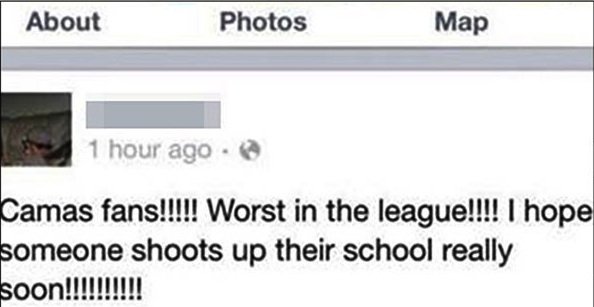 As reported by The Oregonian, Portland TV network KATU and a variety of other Oregon outlets, the father of a boys basketball player for Vancouver (Wash.) Skyview High was involved in an altercation with fans of his son’s opponent while leaving Camas (Wash.) High. Apparently spurred by that incident, the undisclosed parent in question took to Facebook to air his grievances against the Washington high school.

More specifically, this is what he wrote on the social media site:

Naturally, that post sent shivers up the spine of anyone connected with Camas High, particularly in the aftermath of the horrendous events in Newtown, Conn. in December. Though the man later added a second message intended to dispel concern about his initial post, Camas police quickly launched an investigation into the comment.

No charges have been filed against the parent as of yet, but he has already been handed a no-trespass warning by the Camas School District, effectively banning him from stepping foot on any school property in the area again.