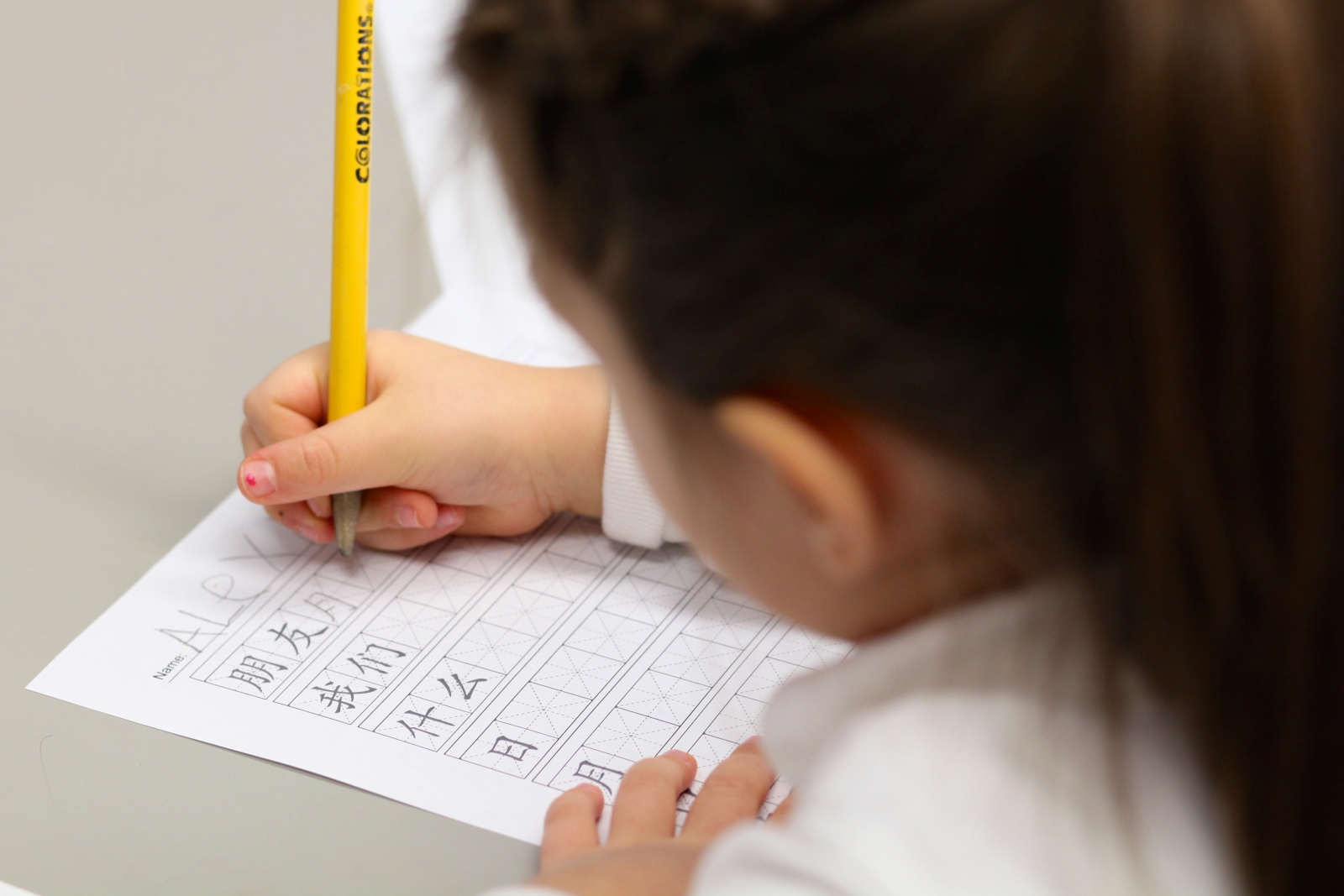 What are your long-term goals for your child?
An immersion program makes sense for parents committed to the multi-year process needed to develop bilingualism, biliteracy and bi-cognition in children.  Once students are on the immersion path, the environment must be maintained— “use it or lose it.” There’s a strong foundation developed after 7-9 years in an immersion school, making it easier to maintain or regain the language after leaving an immersion environment.

What ages and grades are offered in the program?
Immersion programs aimed at developing students with high language proficiency levels should begin teaching students as early as possible and continue through as many grades as possible. The early preschool years are the best time to begin second language acquisition and development since the brain is naturally predisposed to acquire new languages. It’s not too late to begin immersion in elementary grades as neurolinguists believe that the critical window for language learning is from birth through ages 12 or 13. Programs that enable the student to continue through elementary and even middle school ensure that the investment will achieve the desired result. 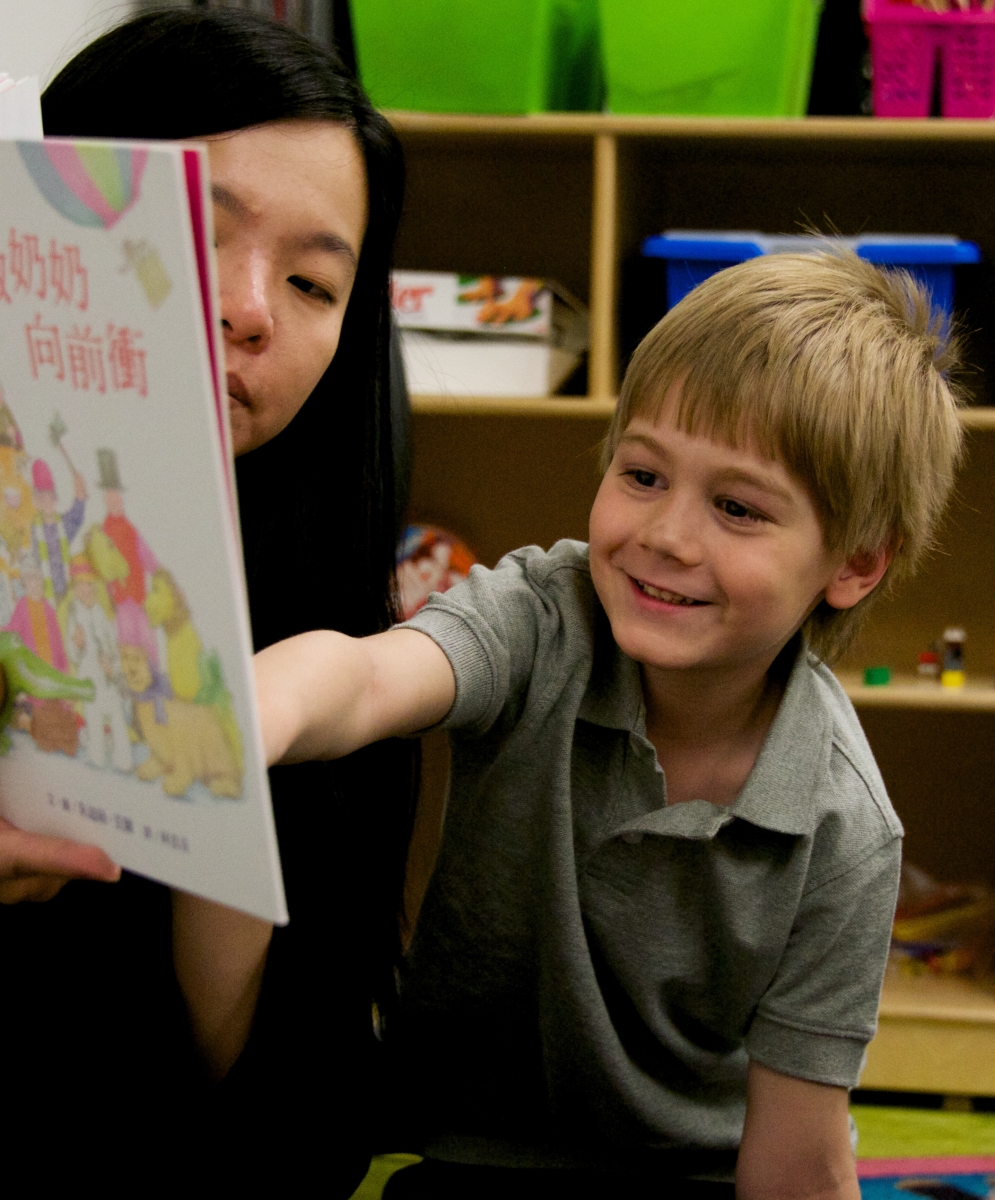 How much time will my child spend in the target language?
Research shows that the more intensive the exposure to the second (sometimes referred to as target) language, the higher the expected language proficiency outcome and the greater the cognitive benefit. Programs will refer to themselves as 90/10 models or 50/50 models which describe the percentage of the instructional day spent in the target language and in English.

One concern parents have is that with all the time spent in the target language their children won’t learn what they need to know to be on par with monolinguals, and that their English language skills will be at a disadvantage. But research shows the opposite to be true! A Rand study of more than 27,000 students in Portland, Oregon, one of the country’s largest immersion school districts, found the English level of middle school immersion students to be almost a full year ahead of their peers. Time spent in an immersion program actually improves the child's ability to learn other languages (like English) too! 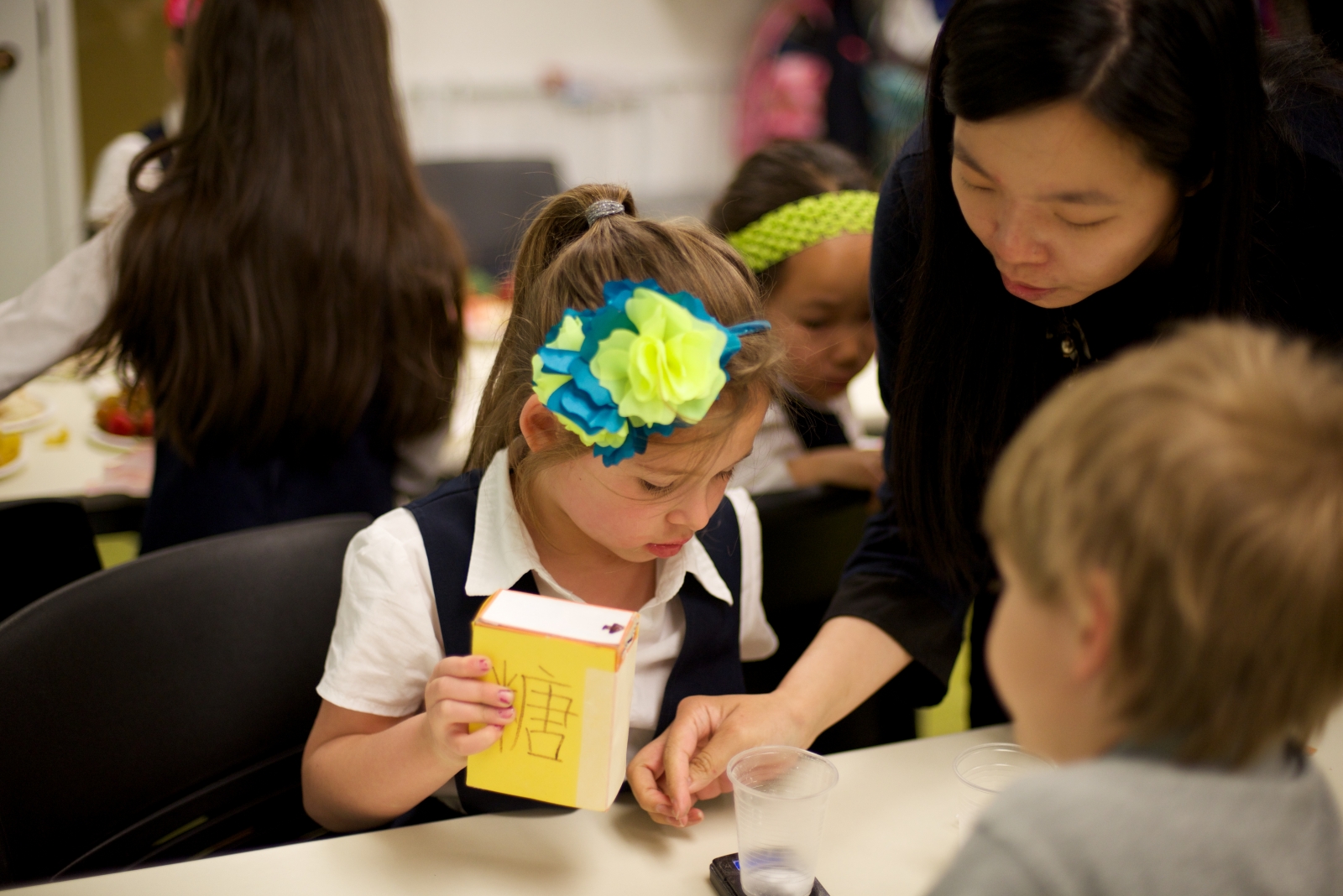 What is the experience and training of teachers delivering this type of education?
A key quality of an immersion teacher should be that he or she is educable in immersion methodology. This is best demonstrated by holding Bachelor's or Master's degrees in Education from US colleges and universities. The teachers are typically fluent, native speakers of the target language, and may have prior experience with the age group they are teaching and exhibit a passion and commitment to the teaching and learning process.

Is the program achieving the desired academic outcome?
The immersion school should be measuring its results. One way to measure academic outcome is by using a standardized assessment, such as PARCC or ERB, which can compare individual student achievement to a national norm. These assessments, administered in English typically in grade 3 and beyond, are assessments of English language arts and math skills. Nationwide, students in immersion schools outperform students in monolingual schools across all socioeconomics levels.

In a Spanish or Mandarin immersion program, there is usually additional testing done to assess listening comprehension and language arts literacy skills in the target language. Now with more immersion programs in existence, there are also norms to compare student proficiency in the language with other immersion programs nationwide. Factors that can impact the outcome include the quality of the design of the program relative to the characteristics of the students, the curriculum, student to teacher ratio, and whether teachers are continuously assessing and differentiating instruction to benefit each individual student.

How does the school support families who do not speak the target language?
Most families of students in immersion schools don’t speak the target language at home. Newsletters are helpful so that parents understand what’s being taught. Schools often promote cultural understanding through celebrations of important holidays, such as Chinese New Year, or Three Kings Day in the Latino culture. Some schools develop summer immersion experiences abroad to enable students to use the language where it’s spoken as the mother tongue. Seeing your child interact with native speakers is a truly exciting moment – one that stays with you and makes all the effort worthwhile.

To learn more about immersion education programs, or to ask questions of your own, visit an upcoming open house at HudsonWay Immersion School. Please RSVP at hwis.org/admissions/open-houses.

Sharon Huang is the founder and CEO of HudsonWay Immersion School, an independent preschool-Grade 5 Mandarin and Spanish immersion school in NJ and NY.  She started the program in 2003 as Bilingual Buds because she was unable to find a Mandarin preschool for her then 2-year-old twin sons.  The school has grown to more than 200 students in Mandarin and Spanish in NJ and NY. Sharon’s passion is to support further growth of immersion education in the U.S. 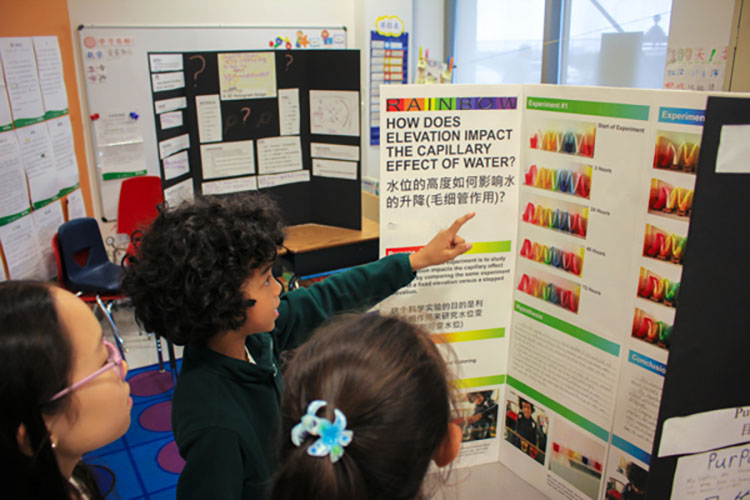 If you’re one of many parents who has always wanted your kids to learn a second language, chances are you’ve heard about language immersion. The technique has been praised for its effectiveness in helping kids become fully bilingual. Here, the founder and CEO of HudsonWay Immersion School and the mom of bilingual twin boys fluent in Mandarin Chinese shares what you need to know about immersion education and why it works.

What is an immersion education?

Immersion education is a methodology that teaches major subjects like language arts and literacy, math, science and social studies in a target language (or second language) and in English. In other words, all subjects are taught using a target language other than English as the vehicle of instruction for significant periods of time. Students learn both the subject matter and the target language, which enables them to become bilingual and biliterate while learning the content required by the state.

Beginning with the French-Canadian models in the early 1960s, this method has existed for almost 60 years and has recently seen significant growth in the U.S. due to research showing its many benefits for students of all socio-economic backgrounds. For a school to be considered an immersion program, at least 50 percent of the instructional time should be provided in the target language.

What are the goals of immersion education? 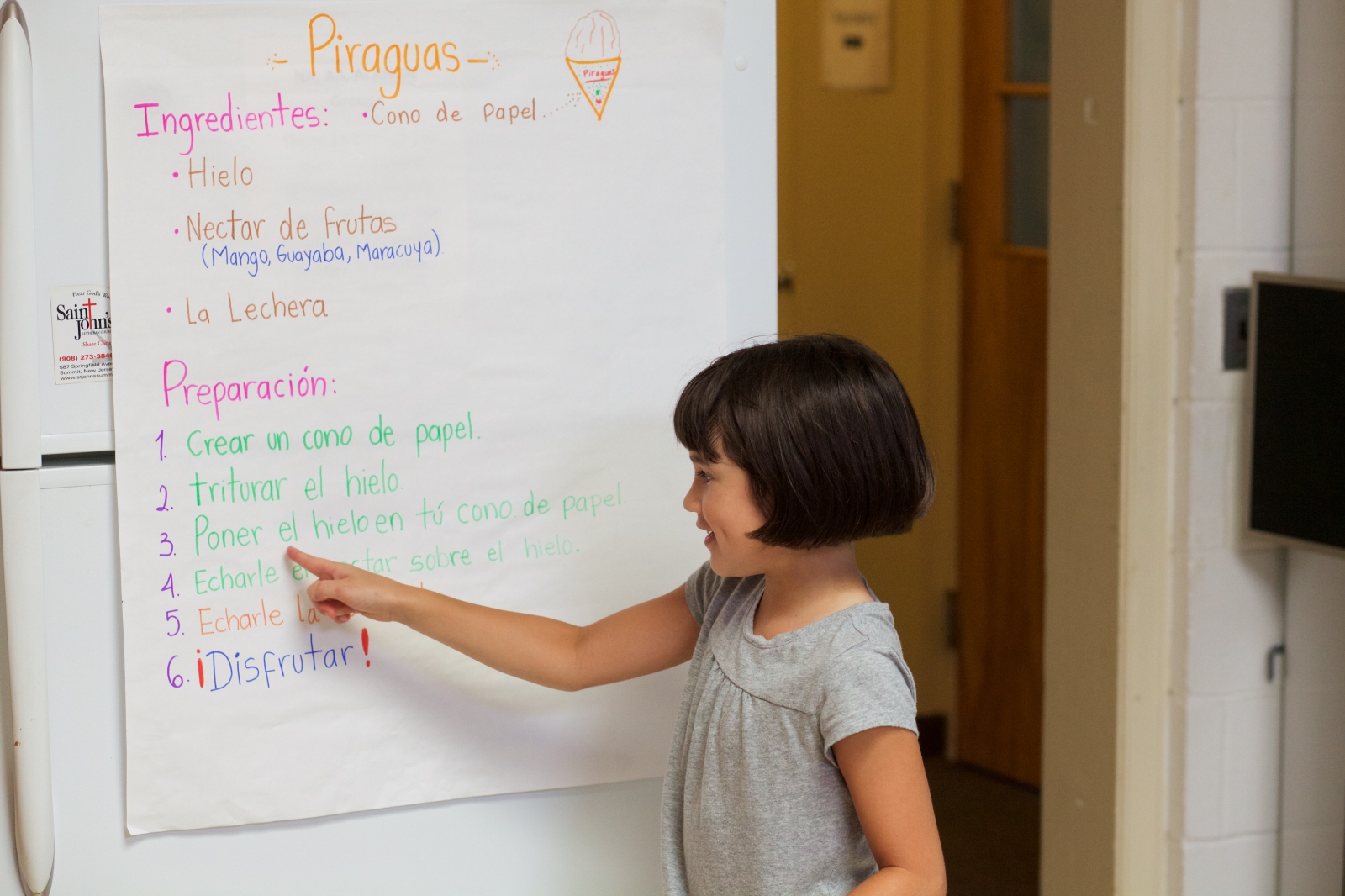 What are the benefits for this type of education for my child?

Immersion education is not only the most efficient way to acquire proficiency in a second language, it’s also the form of education that offers the best education, period.  When a child is immersed in this type of program early and consistently (we recommend as young as 2.5 years old) the process changes his/her brain in the following ways:

Administrators at HudsonWay Immersion School sometimes call this process “magic” but there is extensive science and a deliberate effort to ensure that the immersion program is properly constructed. The process works because students are put in a situation in which they must comprehend and interact in order to function. Beginning in preschool, students spend significant lengths of time in the language and complete daily activities with repetition that helps them acquire the language.

We take advantage of the “critical language learning window” which begins to close as early as age one but remains open until about age 12, when the brain is naturally wired to grasp the grammatical structures of various languages. All of this learning is taking place in a tightly controlled environment where teachers are trained to support students by speaking in the target language, carefully select appropriate level class materials, and the environment is maintained in the target language to reinforce the goal. This process produces a child who is bilingual, biliterate, and bi-cognitive – even when his or her parent may not be. In fact,most HWIS students do not have a native 2nd language speaker in the household.

Recently relocated to Stirling, HudsonWay Immersion School is looking forward to providing families in the Long Hill Township, Basking Ridge, Berkeley Heights/New Providence, Warren and surrounding communities the opportunity to offer their children an immersion education. Learn more about our programs for children Pre-K (starting at age 2.5) through grade 5 at an upcoming open house. Please RSVP at hwis.org/admissions/open-houses.

Sharon Huang is the founder and CEO of HudsonWay Immersion School, an independent preschool-Grade 5 Mandarin and Spanish immersion school in NJ and NY.  She started the program in 2003 as Bilingual Buds because she was unable to find a Mandarin preschool for her then 2-year-old twin sons.  The school has grown to more than 200 students in Mandarin and Spanish in NJ and NY. Sharon’s passion is to support further growth of immersion education in the U.S.