Maybe it’s COVID. Maybe it’s the fact that we have become more adversarial in our lives. But domestic violence appears to be on the rise, and by virtue of that, domestic violence court proceedings are on the rise as well. A person who seeks and obtains a Temporary Restraining Order (TRO) will then have the responsibility (the “burden”) to prove that it needs to be finalized.  Those Final Restraining Order (FRO) hearings, are often very contentious and emotional, due in large part to the tremendous stakes involved. With those stakes in mind, the actual process of conducting the hearing is made much more difficult and adversarial by what can often be described as “trial by ambush.” Why is that you ask? Due to the summary nature and expedited fashion of the proceeding, there is often no exchange of discovery. By that we mean that the materials intended to be used and/or offered into evidence by each party are not shared in advance, a procedure unlike most others in our court system. Hence the phrase, “trial by ambush.”

The process for these proceedings are dictated by Court Rules, our State’s Criminal Code, and previous cases that have been decided in this area (case law).  None of those require the exchange of discovery in FRO hearings. It’s also uncommon for such materials to be exchanged pursuant to Court Order. This process differs from other areas of the law, such as criminal, civil, and even family law trials, which require the advance exchange of discovery. The basic reason for this is that FRO hearings are “summary actions,” which, by definition, are “short, concise and immediate.” These proceedings are mandated to proceed within ten days of the filing of a domestic violence complaint with the goal of “promptly and appropriately offering protection to victims of domestic violence.” Our courts have held that “any delay may pose serious and irreversible consequences to the victim.” That’s why domestic violence proceedings are “immediate,” and our courts have held that the proceedings “normally require no more than a few hours to conduct.”

Despite the expedited nature of the proceedings, due process (i.e. fairness) is required. And when it comes to what information is and is not required to be shared in advance of an FRO hearing, the basic requirement is notice. But not of everything. A plaintiff – the party seeking the FRO – is required to set forth the basis for his or her application through the “four corners” of the TRO. This means that all of the allegations that are going to be brought out in court should be stated in advance within the TRO document.  This advanced notice puts the Defendant on notice of what he or she has to defend at the FRO Hearing. However, the evidence to support the allegations contained within the TRO may come in many forms, and without knowing specifically what that evidence may be (i.e. an email, a text message, a video, an audio recording), there is simply no way to adequately prepare and defend. The rules and procedures, or lack thereof, allow a witness to testify and offer evidence as they go without advance notice of what that evidence is. Similarly, a witness can be cross-examined with materials that have not been shown to or discussed with that witness in advance of the hearing.

Lawyers who practice in this area know all too well that FRO hearings are far from “short, concise and immediate.” Some may last “a few hours,” but most take far longer.  In most cases, there is a dissection of the history between the parties, who by the very nature of the proceedings, have a “relationship.” In this day and age that means a significant amount of material that may be amassed by one or bother parties.

Both the stakes and the rules leave the parties – lawyers and litigants appearing on their own (pro se) – with several significant hurdles to overcome. Some tips for doing so. First and foremost, everyone should be civil. Even though the litigants may not like each other (anymore), if attorneys are involved, they should not take on that persona. One attorney asking the other to exchange discovery in advance is a good first step. If you or the attorney refuses, consider letting the Court know that the request has been made. If nothing else, at least you and your client will appear to be acting reasonably.

Second, whether an attorney or a pro se litigant, consider making an application to the Court. This may be an uphill battle but try to establish to the Court why it is that you need it. In legal terms, this is called “good cause.” If you can establish a reasonable basis for the request, the Court may be on your side. Making a “good cause” argument is fact-based and not easy. Courts want to move these cases, and a delay to exchange materials may be frowned upon. Stress to the Court the ease with which materials can be exchanged and that no additional time is required. Also, throw out the fairness and due process arguments. The Court’s solution to this may not be to require the exchange of materials, but to give you more time in the midst of a hearing to address the materials brought out during the hearing. If you ask us, it’s just better to have everything in advance. Additionally, judges are never thrilled to adjourn in the midst of a hearing.

The entry of a FRO can have significant, life-impacting consequences. A FRO could impact a person’s custody and parenting time, the permanent removal from their home, the inability to possess a firearm, safety checks when traveling, and the possible bar from certain types of employment. Those are only a few examples. It is also permanent, which in short, means forever. And a violation can result in a mandatory arrest. This is serious stuff.

To avoid a “trial by ambush” and the very serious resulting consequences that flow from the issuance of an FRO, the courts should give clear guidance on the requirement for the exchange of discovery. And it should be as simple as this: if one party plans to use something, they must share it in advance. That is a minimal burden, and one that can be easily satisfied.

Matthew James Troiano, Esq. is Chair of the Criminal Practice Group at Einhorn, Barbarito, Frost & Botwinick, PC in Denville and can be contacted at mtroiano@einhornlawyers.com. Matthew provides clients with legal guidance on very complex situations as well as any criminal matter that can arise in New Jersey. Based on his experience as a former prosecutor, he is uniquely situated to help clients who are the subject of an investigation, under arrest, or going through a serious ordeal that requires knowledge of the criminal justice system. 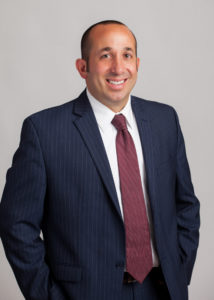 Brian D. Kenney is an attorney in the Criminal Practice Group at Einhorn, Barbarito, Frost & Botwinick, PC in Denville and can be contacted at bkenney@einhornlawyers.com  In the area of Criminal Law, Brian specializes in criminal defense, domestic violence, law enforcement representation, and victim representation.