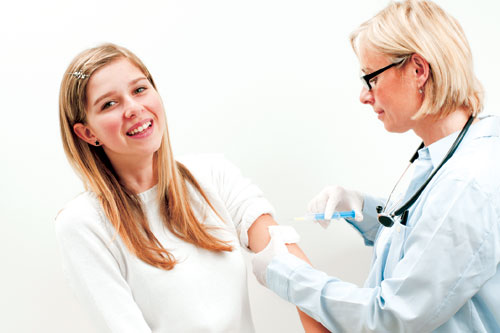 Adolescence is a period of great emotional, physical, sexual, and intellectual development, marked most significantly by a teen’s desires to forge her own identity in preparation for young adulthood. One way a teen breaks away from her nuclear family is the phenomenon of “running in packs”: she finds a peer group she feels she most belongs to and becomes inseparable from it. She shares everything with her new nuclear family: ideas, tastes in music and clothing, and all her free time. Neither  before nor after adolescence does one hang out in such a close-knit group, in such proximity, and so frequently.

What’s this got to do with vaccines? After all, the adolescent immunological profile tends to be robust—it’s at a period of tremendous growth, and adolescents don’t tend to fall ill to common diseases that prey on the very old and very young. But here’s the critical point: because of their social patterns, teens are especially vulnerable to communicable diseases that spread quickly and easily among tight-knit groups.

Adolescence also marks the beginning of sexual activity. Its frequency rises and the number of sexual partners rapidly increases during the adolescent years and into the 20s. Therefore, here’s what we should protect our teens from: diseases that can infect otherwise healthy individuals, diseases that spread easily among close-knit groups, and diseases that can be sexually transmitted.

Vaccines consist of parts of viruses or bacteria (inactivated vaccines), or weakened viruses that have been deprogrammed from making people sick (attenuated or live vaccines). They introduce antigens—essentially foreign disease molecules intended to trigger a protective reaction—to the body. When our immune system encounters the antigens in a vaccine, it makes antibodies (proteins that neutralize these foreign molecules). Some of these antibodies are lifelong; some can diminish over time.

We vaccinate infants and toddlers to give them that first burst of antibodies, but these wane quickly over the early years. By the time they start elementary school, we “boost” our kids’ immune system with another set of shots to make sure they’re continuously protected. Then, before children launch into adolescence, we protect them by giving them booster shots (only for diseases that would plague a teen), and vaccinate them against new diseases they’re now more susceptible to. Here's a downloadable vaccination chart that shows the complete list of adolescent vaccines, as well as vaccines that may need catch-up.

A Word About Vaccine Safety

We physicians make recommendations with these principles in mind: first, do no harm; provide the most amount of benefit in our patient; and prevent diseases. And we advise in good faith. Before vaccines are submitted to the FDA for approval and licensing, they must be thoroughly tested. Clinical trials on human subjects are conducted, and all adverse reactions are reported. The FDA then looks over the application carefully and decides whether the vaccine is safe to be used on the general public.

After a vaccine is licensed and given to people, a continuous post-marketing vaccine surveillance program ensures that it’s safe. This program is called the Vaccine Adverse Event Reporting System (VAERS), co-sponsored by the Centers for Disease Control and the Food and Drug Administration. If there’s any hint that a vaccine causes adverse reactions, a panel of experts is immediately assembled to look at whether it’s a causal effect, and may recommend withdrawing the vaccine from the market. So if you worry that your child has suffered a vaccine reaction that isn’t common or known, talk to your doctor about reporting it to the VAERS.

When the chickenpox vaccine came out in 1995 (around the time current teenagers were born), only one shot was recommended. After a few years, doctors noticed some “breakthrough” cases, and that about a third of children had lost their antibodies. A 2006 recommendation called for a second shot. If your teen only had one dose of chickenpox vaccine, make sure he gets a second.

In our lifetimes, 75 percent to 90 percent of us are exposed to about 40 different strains of human papilloma virus. Usually our immune system can fight them and we have no symptoms. But in about 10 percent of us, some strains will cause genital warts, and every year about 22,000 of us are diagnosed with cancers caused by high-risk strains.

Additionally, each year more and more throat and other head and neck cancers are being diagnosed in people in their 40s and 50s, many of them caused by HPV strains. Condoms will help decrease exposure, but don’t always prevent transmission. That’s because this virus doesn’t live in bodily fluids like Hepatitis B or HIV, but rather on skin and mucosal surfaces (such as the tip of the penis or the vaginal canal). The HPV vaccine works by giving the immune system a boost, before it even encounters a possible HPV infection, so it’s prepared to fight off the virus if it’s exposed.

Studies show the current two vaccines against HPV to be highly effective in preventing the cancer strains (about 70 percent of them), and the genital wart strains (90 percent; only one vaccine prevents warts). Ask your physician which vaccine she carries.

When the HPV vaccine was approved in 2006, only girls were recommended to get it. In October 2011, though, the CDC recommended boys get the HPV vaccine, too. However, we still face the problem that this vaccine prevents an illness caused by a sexually transmitted disease—and no one wants to think of his kids having sex. So I propose you go ahead and lament the fact that your children are growing up too fast, and will one day be—or already are—sexually active. But don’t let that interfere with doing what you do best: protecting your children in potentially harmful situations, so they can do what they always planned to do anyway. Draw the parallel between giving them this vaccine and buckling them into the swing seat at the park as toddlers, or insisting they wear a helmet to go skateboarding.

While there’s plenty for us to worry about when our children go through this tumultuous period of adolescence, vaccine-preventable diseases should be the least of our concerns.

Cheryl Wu is a pediatrician and mom who lives in Hoboken, NJ with her 4-year-old son. She writes frequently for various parenting publications.