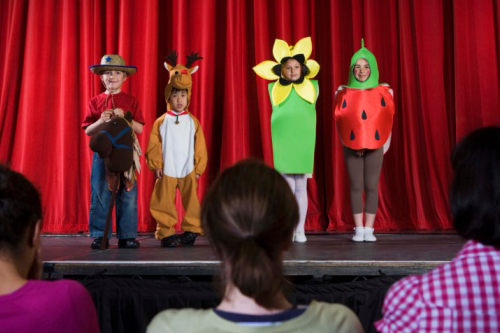 There’s a new stage mother in town. One who makes the ladies on Toddlers and Tiaras look like warm, caring role-models. That’s right, I just found out my son will star in the low-budget, way- off-Broadway, first-grade production of Nutrition Mission. He has the hard-hitting role of Banana #2. Now, if you have a daughter, it’s important to note here what a barren wasteland moms who have only boys inhabit. While you get to experience the thrill of handing out scads of invitations to piano recitals, ballet performances, and costumed stage performances, mothers with a houseful of little men get bupkis! No backstage fussing, no knowing glances, and no wardrobe malfunction drama. So I’m milking this play for all it’s worth!

My son’s opening monologue is precisely eight words. These few syllables could make or break his entire career. The pressure is intense. His big competition are the tomato and the yellow squash. I can tell they don’t want it as much as my child. But the carrot does. To ensure my guy steals the show, I’ve planned a rigorous rehearsal schedule of voice training for his Lunchbox Rock song solo, and intense method-acting lessons for his opening monologue. I want him to really feel like fruit. I can see the New York Times review now: “The boy in the banana costume is a young De Niro!”

After practicing his lines for weeks, and running through his song a billion times, the big day finally arrives. I’m sooo nervous. Him? Oh he’s fine. He keeps saying, “Mom, I got it. It’s no big deal. Geezzzz.” However, in a few minutes the curtain will go up and it’s anybody’s guess what will happen. Come along with me (and the 46 other relatives who flew in for the event) to his stage debut.

Wow, it’s crowded here. Honey, grab those seats up front. No, not those; the ones over there. Whatever. Just sit down. Sit down! Oh my gosh, the play is about to start. Shhhhh!  Is the camera ready? Where’s the tripod? Start the video—we don’t want to miss anything. Where’s the playbill? That baby’s getting framed. Wait, it’s starting. Look. There’s Aiden! “Our nutrition mission is to help you see …” Yes! He nailed it. I hope Michael got that on film. Where’s my 5-year-old? Doesn’t matter, I gotta get out of this row of chairs before his song. Excuse me, pardon, oops, my bad, sorry …

As I duck under the other parents’ cameras and move to the side of the stage, I smile at my son, hoping he’ll smile back. He does nothing but stare at me blankly. Then I shoot him the freaked out, over-the-top, weirdo grin that makes me look like a sociopathic toon. Yay, that worked. Now I’m on my belly, military crawling to the center of the stage. The paparazzi are fierce, but I need the money shot. Hey, who put Gigantor next to my son? How am I supposed to get him on film with Howard Huge there? I want to see that kid’s ID. Is he 7 or 14? Come on!

Allrighty. Time for Aiden’s big solo. Look. Look. Look!!  He’s about to rock the house. (Aiden sings his song.) He was the best kid up there. Bravo! As the thundering applause fades I know what you’re going to say: That was better than Cats! Let’s face it; my boy’s a rock star.  Did you see how he connected with his audience? What talent! Excuse me while I elbow through his sea of admirers …

As I embrace my little Bieber I worry this may be the last time I get a thrill like this. Fame is fleeting and, as I said, I don’t have any girls. So today I’ll bask in the glow of the footlights. Tomorrow life will return to normal. No more rehearsals. No more memorizing lines. No more dance routines. I guess I don’t mind. After all, I hate the thought of sharing my son with anyone. And throngs of crazed fans are the last thing I want littering my porch. Imagine the mess. So let the curtain fall and take one final bow, my sweet Aiden. Even if you’re never on stage again, you’ll always be my top banana.

Jane Suter is one funny mom. To share some of your own parenting experiences with Jane, write to her at janesuter@hotmail.com.

How thrilled were you the first time your son or daughter was on stage? Were you more excited than he/she was? Or more nervous?