Are You Willing to Send Your Kids to School this Fall? The DOE Wants to Know

Retail Stores are Re-Opening Soon, But Not Malls

Food is about so much more than nourishment—it’s a central part of our celebrations and everyday traditions. Think of happy summertime memories, like a great BBQ with friends or a decadent scoop from your favorite ice cream place down the shore. But as every parent who’s ever tried—and failed—to zip that pair of jeans knows, food can also sometimes feel like an enemy. And the sad truth is, that feeling can grow into a dangerous, life-threatening eating disorder for our kids. 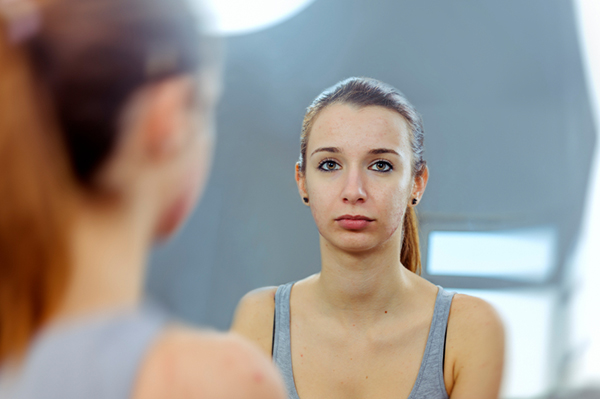 The statistics are alarming: According to the National Eating Disorders Association (NEDA), approximately half a million teens struggle with eating disorders or disordered eating in the United States. There are an estimated 300,661 cases in New Jersey alone, according to a 2011 report published in the Archives of General Psychiatry. The National Association of Anorexia Nervosa and Associated Disorders (ANAD) reports that more than half of teenage girls and nearly a third of teenage boys use unhealthy weight control behaviors, like skipping meals, fasting, smoking cigarettes, vomiting or taking laxatives. Scarier still: ANAD reports that eating disorders have the highest mortality rate of any mental illness. And yet only 10 percent of people with eating disorders ever get treatment.

The most vulnerable age

Eating disorders can manifest at any time, says Dana Harron, a D.C.-based clinical psychologist specializing in the treatment of eating disorders, but there are two times in life when kids are at their most vulnerable: When puberty strikes and during the first year of college.

“Puberty is associated with so much—all the hormones are changing, there’s peer pressure, self-esteem issues,” explains Dr. Harron, who serves as associate clinical faculty at the George Washington University Professional Psychology Program and has been a staff psychologist at The Renfrew Center, one of the nation’s leading residential programs for eating disorders. “Meanwhile, college raises anxieties about adulthood, leaving the family, and so on.” All of these stressors make kids particularly vulnerable.

It's Not Just Girls

While food disorders are more common among females than males (about 20 million women in the U.S. and 10 million men will suffer from a clinically significant eating disorder at some point in their lives, according to NEDA), it’s a mistake to think you’re in the clear if you only have boys. About one in 10 reported cases of eating disorders involves a male, says Dr. Harron. ANAD reports that up to one in four children referred to a professional for anorexia is male and an estimated 10-15 percent of

people with anorexia or bulimia are boys. The actual numbers may be much higher, she says, because parents of boys may be less likely to seek, or be referred to, treatment.

“We don’t have as much of a handle on how eating disorders might look different in males,” she says, citing “extreme muscle building” as one such scenario. “With a less gender-myopic view of diagnosis, we might find more cases in boys.”

In other words, it’s not just girls who are affected by the beauty ideals they see around them.

Most common types of disorders

You’re probably already familiar with anorexia nervosa, in which sufferers essentially starve themselves to lose weight and bulimia nervosa, where binging and purging are used to the same effect. But another condition called binge-eating disorder, where sufferers are compelled to overeat even though they feel ashamed and sick, is actually more common in the United States. And then there’s orthoexia, a disorder that’s prevalent among teens and is known as “extreme healthy eating.” Those afflicted become obsessed with eating in a certain way, such as completely refusing to consume any carbs, explains Dr. Harron.

The difference between an orthoexia sufferer and a fad diet follower is one of degrees. “We all have eating preferences,” Harron explains, “but somebody with orthorexia might avoid eating with friends or family entirely because they may be expected to eat foods that feel uncomfortable to them.” They might also be secretive about their dietary habits. Examples of orthorexic behavior include extreme emphasis on organic foods and unilateral avoidance of carbs or protein. “Orthorexia is really defined by the extremity,” says Dr. Harron. “All eating behaviors exist on a spectrum from healthy to disordered.”

Last but not least, what’s becoming increasingly common among young people,  she says, is something called subclinical disordered eating, or unspecified eating disorders. “This is where a teenager might not have a diagnosable eating disorder—yet. For example, they’re dieting in an unhealthy way and they’re just on the fringe of a diagnosis,” she explains. “This is what we’re seeing the most.”

Worrisome symptoms and behaviors include hiding food, spending a long time in the bathroom immediately after eating, trying to make it look as though food has been eaten when it hasn’t, weighing oneself frequently, cutting food into very tiny pieces, using odd combinations of foods or acting anxious when food or weight issues come up, according to Dr. Harron.

That’s why it’s so important for parents to know the warning signs and listen to their hearts, says Dr. Carlin.

“Trust your instinct as a parent,” she says.  “A lot of what brings people in to the clinic is just parental instinct—something’s not right.”

Red flags can be obvious, like extreme weight loss or the smell of vomit after every meal—but they aren’t always. “An eating disorder is a very sneaky and secretive disease,” says Dr. Carlin. Unlike other mental health issues, such as depression or anxiety, where a kid might reach out for help because she's aware of her suffering, very often a teenager with an eating disorder doesn’t want you to find out.

“They want to hold on to it,” says Dr. Carlin, so they become very clever at hiding the signs. Even a child who has never lied before can appear manipulative or deceitful, but it’s because they’re compelled to act that way.  “It’s not their fault, but you might not get a straight answer,” she says.

An eating disorder can cause grades to drop, as cognitive function is affected because of malnourishment—but the opposite can also happen, says Dr. Carlin. “Sometimes kids have the best grades they’ve ever had in their lives, or even a great sports season, because the obsessiveness that comes with an eating disorder can extend across different aspects of life as well.”

To make matters more complicated, some of the symptoms of an eating disorder can be confused with the everyday side effects of being a normal, hormonal, moody teenager. Low energy, anxiety, agitation, a disinterest in family meals—these are all eating disorder red flags that could easily be chalked up to just being a 'tween or teen.

The bottom line? If you suspect something is wrong, it’s time to take action. “We’re the experts on eating disorders,” says Dr. Carlin,

“but you’re the expert on your child.”

How to approach your child

As early as possible, have a conversation with your daughter or son about what you’ve observed, advises Dr. Harron, something as simple as “I noticed you haven’t been eating a lot at dinner lately … is everything okay? I’m worried about you.”

Use a non-accusatory tone: Think of how you would ask your child if he were under the weather or running a fever. “Empathy is so important—warm, empathetic support is the best,” she says.

It may turn out that your child’s tastes have simply changed, since your kids are, after all, developing every day and growing into young adults. It could be that he picked up some misinformation about food or nutrition (“all carbs are bad!”) and you just need to clear things up, says Dr. Harron. “Or you may learn there is a really profound fear of gaining weight, or not being able to lose weight, and that’s when you should be very, very concerned.”

Seek out an expert immediately

Once you’ve identified a possible eating disorder, finding a qualified doctor to help as soon as possible is paramount. ‘The faster you act on your instincts and intervene, the better the prognosis,” Dr. Carlin says.

And if you find yourself feeling guilty, wondering if something you said or did could have caused this—don’t.

“Eating disorders are very complex, and they’re not caused by any one thing,” says Dr. Harron. There’s often a genetic component, she explains, as well as psychological, cultural and environmental factors too, such as peer pressure and societal expectations. “I wish that parents knew how little we blame them,” says Dr. Carlin. We are really there to be on a team with you.”

• Disappearing into the bathroom after every meal

• Bloodshot or watery eyes after being in the bathroom

• Digestion problems, such as constipation

• Irregular or non-existent periods in girls

• Rapid consumption of a large amount of food

• Eating alone or in secret

Where To Go For Help

•  Academy for Eating Disorders (AED)
aedweb.org • 703-234-4079
Download a guide on early diagnosis and treatment and find resources and more information.

• University Medical Center of Princeton at Plainsboro Center for Eating Disorders Care
princetonhcs.org • 877-932-8935
A nationally renowned treatment facility for those of all ages battling eating disorders.

*image is for illustrative purposes only

Does Your Child Need a Therapist?

Protect Your Kid from Heat-Related Illnesses in Extreme Summer Heat

How To Cope With Severe Acne