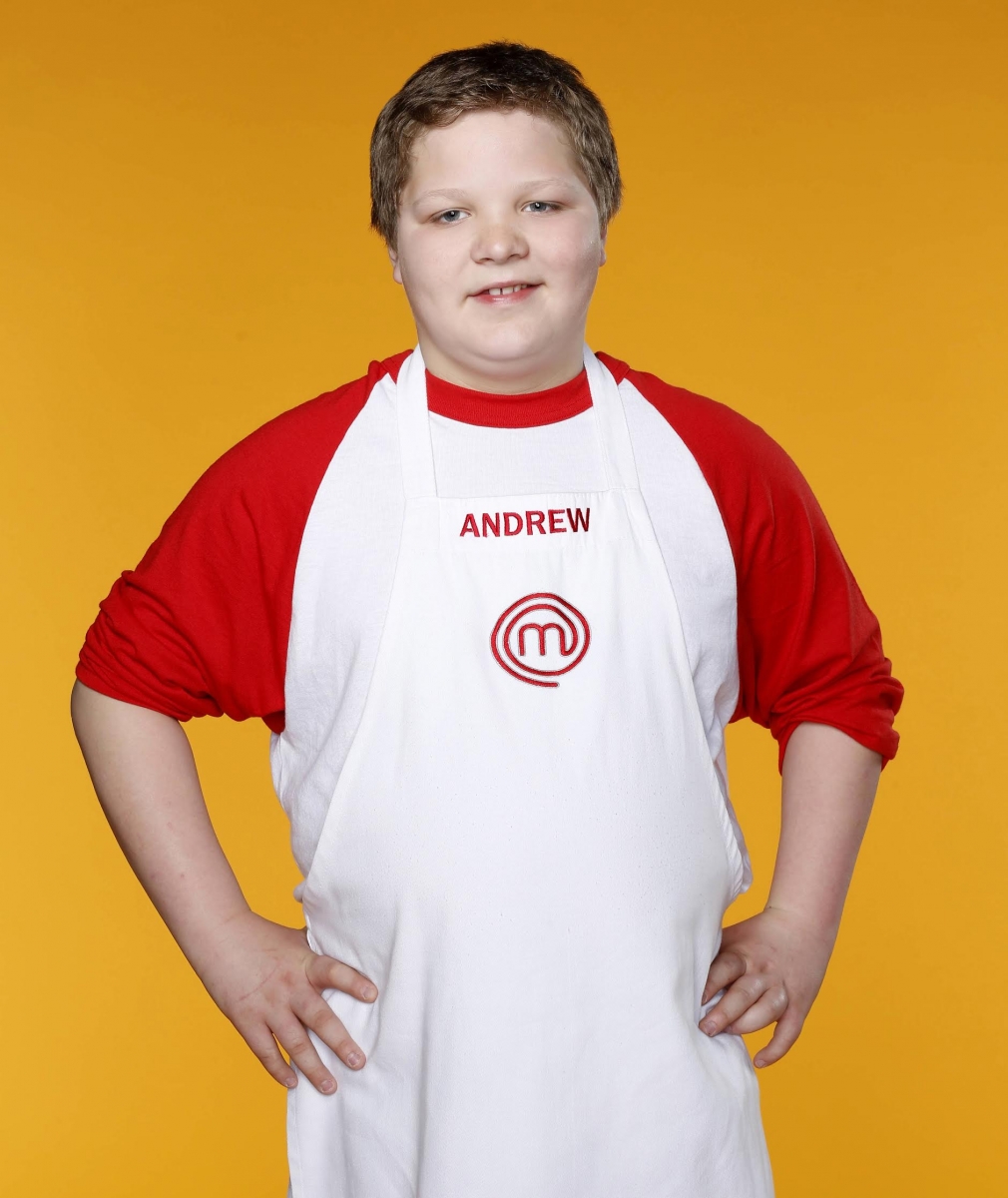 We're hooked on Masterchef Junior, it's a great family-friendly show, and we're not-so-secretly hoping it inspires our kids to start making us fabulous meals. This week we chatted with  show star Andrew from West Deptford, NJ, one of two New Jersey contestants this season. His dad Phil was on the call as well, and had no complaints about the fact that his son has taken over the kitchen (he considers his own clean-up duty a fair trade). But what inspires an 11-year-old to make amazing meals? We had to find out.

NJF: When did you film this show? Were you off from school for a bit?

Andrew: I was off from school for a little bit. It was in last April. It was fun.

NJF: When you came back was everyone excited?

Andrew: They didn't know about it.

NJF: What do they think now that they can see you on TV?

Andrew: They like watching it. They didn't know that I was there. They thought something went wrong where I wasn't in school for a while.

NJF: Has this made you Mr. Popular?

Andrew: [Laughs] Uh, yeah. You could say that.

NJF: What made you want to go on the show?

Andrew: I saw a commercial for Season 1 and I thought, 'I'm great at cooking.' I ran down and showed my mom. Even though the show as already filmed, they were looking for next season. I filled out an application without even telling my mom.

NJF: You were 11 at the time? And you filled out the form without your mom? That's impressive.

NJF: When did you start cooking?

Andrew: I started cooking between the ages of 2 and 4 with my grandmother. We just made little desserts like pound cake and cookies and Easter candy. We did that and it was good so I just started trying “real food." When I say real food, I mean like savory food. Like meat. I was good at that too. So I kept practicing and I got really good at it.

NJF: Did you take any cooking lessons or classes?

Andrew: I'm all self-taught. I don't like cooking classes, or people telling you how to cook when you know how to cook. I'm independent when it comes to the kitchen. If my mom is in there trying to make something, I run in there and take over, I usually complete every meal that we make.

Andrew: My favorite thing is spaghetti and meatballs. It's hearty and you can make the sauce from scratch and homemade meatballs. And now [since the fresh pasta challenge on the show] I know how to make fresh pasta.

NJF: Did you have any idea or warning of what you were going to be cooking on the show? Did you get a demo of it?

Andrew: If you listen when they speak, they tell you a perfect sausage is made up of 'this and this' and you can kind of get a hint. It's a little bit easier.

NJF: You paid attention to the clues.

Andrew: I think I'm the only one who did that. I don't think any one else did that.

NJF: What was it like putting a pie in Gordon Ramsay's face?

Andrew: It was super awesome. It was cool to shove the pie in his face and get it in his hair.

NJF: Why did you pick Gordon instead of Joe?

Andrew: I could have picked Joe, and I really wanted to pick Graham, but I picked him because all of the other step stools were slippery and I didn't want to get hurt, because I knew I had to cook something good in the next challenge.

NJF: So far we've seen you make some tricky things. Was anything a challenge for you?

Andrew: In the team challenge with the sausage, when I was working with Cory. I think that Jimmy when he chose the teams was maybe out to get me because he paired all the other teams up fairly and I was with Cory. He's not a bad cook, but our personalities are totally opposite. When it comes to the kitchen they are clashing and it is really hard to work with him. Gordon Ramsay said we both had to work as a team. I told Cory, 'Listen, what I'm cooking is what I think is going to keep us in the competition. Whether it's the second to worst, or the best dish, [it doesn’t matter] because the person with the worst dish goes home, so we're going to stay in the competition. If I don't think I like something, or you don't think you like it, tell me and we'll fix it. We're going to have to agree on something.'

NJF: You didn't just get along because you are both from Jersey?

Andrew: Uh, no.  We were different.

NJF: What is your goal for the future? Becoming a professional chef? Having a restaurant? A food truck?

Andrew: I want to have a crepe restaurant because crepes are good. But if I could have a few Mexican and Italian food trucks, definitely Italian because I love Italian, maybe serve food in Philadelphia. I would still have the fine dining restaurant, that would be cool. I could serve quality food on the side of the street like meatball subs and fried polenta cakes. I want to work for good chefs and be a good chef.

NJF: Who is your favorite celebrity chef?

Andrew: Gordon Ramsay is one of them, because I watch all of this shows. Lidia Bastianch (Joe's mom) is great at Italian cooking. Like Henry Ford perfected the car, she perfected Italian cooking. The judges are all good. Jamie Oliver is pretty good. Bobby Flay, I like him. Robert Irvine, Anne Burrell, Beau MacMillan.

NJF: Sounds like you watch a lot of Food Network.

NJF: Where is your favorite local Jersey place to eat out?

Andrew: If I were to go out to dinner… which we don't normally do. It's cheaper and better and you get more experience to make the things at home. We go to a restaurant called Venice [in Pitman]. Its not fine dining, but its not a pizza shack. Its good. Since we're in NJ, there's a town called Haddonfield, they have fancy restaurants and I like to go around town trying different foods to see what I like more. I'm not a fast food guy.

NJF: Last week on the show we saw someone cooking with kangaroo meat, what's the craziest thing you have tried?

Andrew: Alligator, frogs legs (which are really good) and duckfat stew. I've tried the things in small variety, not a whole dish of that because I don't know if I'll like that and a lot of the meats are expensive. I really want to try caviar. I've had lamb. Lamb is good. I cook it pretty good. Rabbit is good. Chicken liver, the gizzards and heart… it's different, but pretty good.

NJF: What do you do when you aren't cooking and in school?

Andrew: I play basketball. When its nice outside, I like riding bikes around. I like collecting old game systems, like Nintendo and Atari and Sega. When I'm not cooking, I like to watch cooking videos because it is cheaper than going to a cooking class. You have someone demonstrating it for you, but you don't have someone telling you to put flour and sugar in a bowl.  I think its better because you can choose whatever you want to make, and in some cases it is pretty inspiring, because you can make little adjustments to their recipes. You can personalize it and make it your own. That's what I did with the pasta challenge. I did an alfredo sauce, carbonara, but I put more sauce than a carbonara, but less than alfredo, I added in bacon. I made personalized food.

NJF: Instead of just plain pasta with sauce?

Andrew: Which I saw a lot of people do. I wanted to think outside the can of tomatoes.

NJF: You are from Jersey, so do you call marinara gravy or sauce?

Andrew: My father calls it gravy. I call it gravy sometimes, but since I'm in an interview I call it sauce. When you think of gravy, some people think of brown gravy over mashed potatoes. When I'm at home and cooking, I call it gravy.

NJF: If there were kids out there who wanted to start cooking, you'd tell them to watch videos online?

Andrew: That's a great way. Practice makes perfect, everyone hears an adult or a coach say that, and you think 'oh, I don't need to hear that again.' But when you think about it, you understand.

NJF: Would you do another cooking show? Top Chef or something when you get older?

Andrew: When Masterchef Junior is over, I'm definitely going to try and go on Chopped. [They have a Teen Tournament] A girl that used to go to my school, she goes to high school now and her friends were on the Chopped show and that was cool.

NJF: You're twelve. So we're going to see you taking over the culinary world in six years?

More Like This:
Kids Cooking Classes in NJ
Family-Friendly Chain Restaurants in NJ
5 Crock-Pot Dinner Recipes You Should Make This Week