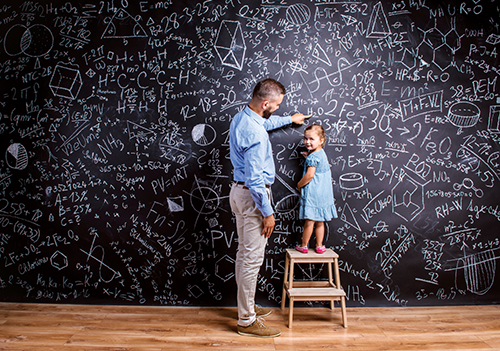 1. On the first day of kindergarten your child will cry and you’ll feel horrible. She’ll scream your name, beg you to stay and, when that fails, beg you to take her home. It’s going to be heart-wrenching. Or she’ll barely give you a second look as she prances over to her friends, not even realizing you’re waiting for a goodbye kiss. Basically, you can’t win. Either way, your kid will likely make a ton of friends and have a fantastic day. So, you will win—you just won’t be able to see it, and you probably won’t get many details either (see number 8).

2. It’s going to feel like your little guy is in class with kids who look like they’re three weeks away from their first shave and others who are still wearing Pull-ups. Your mind is only sort of playing tricks on you. Between cut-off dates and redshirting, the days of everyone being five-going-on-six in kindergarten are long gone. The kids don’t seem to mind—and neither should you.

3. Prepare for a mountain of permission slips you’ll be asked to sign, supplies you’ll need to buy and fundraisers you’ll have to contribute to. Your dream of finding time to go to the gym will quickly shift to wishing you had a personal assistant to keep track of the kindergarten paper trail.

4. If you thought the paperwork was bad, get ready for the artwork. You won’t have enough space on your fridge for all the “masterpieces” that come home. And let’s face it, a bunch of it’s done by the teacher’s assistant who’s taken pity on the kids. You need a disposal strategy. Scan and toss works for most parents. It’s in the computer or on your phone and then…in the recycling bin.

6. There will be instant pressure to prepare for standardized tests and even college. Do whatever is in your power to stop your child (and you) from caving under said pressure. Her dissertation on Dostoyevsky isn’t due until June, but she should have a solid first draft completed by April. I’m joking. It’s kindergarten. Stop stressing.

7. She’ll tell you all about her “best friend,” who may seem to have multiple personalities and genders. “Best friend” is a general term. Like asking for a “Coke” in the South is a request for any carbonated beverage, “best friend” in kindergarten just means anyone she played with that day.

8. Expect to get no information about your child’s day, except when you’re on the phone or using the bathroom. And when you do get details, it’ll feel like you’re getting five pieces of bad news for every good thing that happens. You’ll hear about who’s picking on your child (who, of course, is never the bully). You’ll hear about who was in timeout (never your angel). And you’ll hear about who wouldn’t share their crayon (but would share their hat, hence the lice!). At some point, your child’s teacher will lose her cool and you’ll definitely hear all about that. (Just imagine what she hears about you.)

9. Your kid will ask for playdates All. The. Time. Make it your mission to find a couple of parents you can talk to and set ‘em up early in the year.  Then trick your kid into thinking  it was his idea.

10. You’ll have to stop yourself from being “that” parent. It’s fine to check in with your kid’s teacher about how things are going, but remember he’s not the only student in the class. If there’s a problem, send an email or schedule a meeting.

Most of all, don’t worry about how much your child is learning as long as she’s having fun. If she enjoys school, the knowledge will come, so smile and relax. Everything will be okay.

Dave Lesser is a former attorney who much prefers his job as a stay-at-home dad to two hilarious and adorable kids.